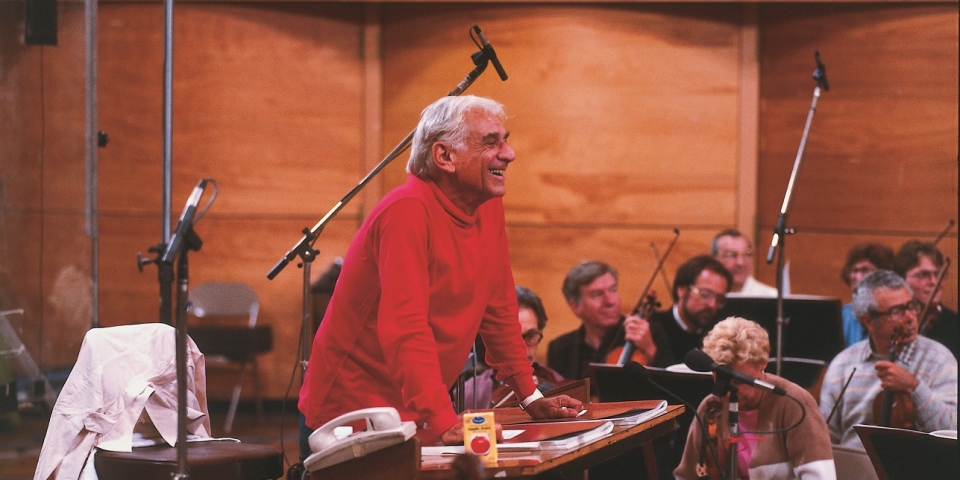 Great expectation, and several unknowns, preceded the first live recording of a performance, on October 17, 1976, which was to be a test for the contract between Leonard Bernstein and the recording company Deutsche Grammophon. For one thing, the Bavarian Radio Symphony Orchestra and the team from DG had never worked with LB; for another, we did not have a lot of experience with live recordings. And the fact that the music was well-known (it was a Beethoven program with the Leonore Overture No. 3, Piano Concerto No. 1 played by Claudio Arrau, and Symphony No. 5) did not make things easier, because with familiar music the conductor must achieve a real transcendence in order to make it a memorable experience for both the orchestra and the public. That day the orchestra played fantastically and it was not difficult at all to get the high-voltage quality of this gala performance for Amnesty International onto record. This, then, became the cornerstone of a close and fertile collaboration which was to last for 14 years.

About 80% of our recordings with LB came from live concerts. The Beethoven cycle with the Vienna Philharmonic went so well that we needed scarcely any retakes and the few we did require were done immediately after the final concert, in front of the public. It was certainly amusing for the audience to be included in this process where, after repeating a scherzo, the Maestro would peer into the hall and ask: "Was that better?"

Later on, as the repertory became more demanding, we had extra sessions for retakes. The process of a live recording took on the following pattern: we would follow the rehearsals with our micrphones, so that we, like the orchestra itself, could learn the Maestro's exact intentions. When permitted, we would record the main or dress rehearsals. After the individual concerts—from two to five, depending on whether we were in Vienna, Tel Aviv, New York or elsewhere—there would be short meetings with the Maestro back stage or in his dressing room. It was not easy for me to be the occasional critical counterpoint among the chorus of enthusiasts, yet I believe that LB appreciated having me as his objective ear in the control room.

Before a retake session I would prepare a list of the sections I wanted corrected. Of course there had to be a reason for each request. The vocabulary is well-known: too early, too late, too high, too low, not together, weak transition, difference in tempo between one concert and another, noises from the audience or even the Maestro's lively stomping on the podium or his singing along somewhat off key—this list could be extended. In most cases, my requests were granted, but LB and I often argued about the length of individual retakes, because in truth we engineers always wanted more than we actually needed. After length discussions, LB would at last accept his fate, albeit morosely, and with the words "I hate retakes" make his way back to the hall. All deadlines are very stressful—in the US we had to use a stopwatch!—and with such tight time pressures we would pray that LB wouldn't encounter many people on his way to the stage, because he had a kind word and an open ear for everyone.

It is no easy task to shape a whole from all these fragments of material: the concert itself, takes from additional concerts or a dress rehearsal, and the retakes. The most important thing to take into account is how to retain the atmosphere, the flow, the arc of the work. It is better to ignore small unevennesses in favor of the line. Finally, we would listen to the results with the Maestro. Wishes to change things—if there were any—were then granted as far as possible. Then the Maestro gave his blessing.

For myself, listening to the work with LB had a very special meaning, because LB's desire to teach came to the fore. His explanations of the music or his rationale for his interpretation seemed so valuable to me.

Our last recording took place in April 1990 at the Waldsassen Monastery in Germany. the abbey was filled with people invited to this retake session. Though we needed only the beginning and the end, LB played the entire Ave Verum by Mozart—unforgettably. When I thanked him, he said he had done it for Mozart, for the people in the church, and for us. These were the last moments of a collaboration which I am grateful for having had.

Hans Weber worked as the Maestro's recording producer for his Deutsche Grammophon recordings.

Special thanks to Dr. Lydia Popper for her translation of this article.

Back to Conductor Deutsche Grammophon Catalogue Search WBUR The All-Embracing Legacy Of Leonard Bernstein: The DG Years From critic Ed Siegel
Come On, Deliver...
the latest Leonard Bernstein news... to me!