Isaac Stern at 100: Lenny & Isaac
A concert at Carnegie Hall on September 27, 1960, was the first event after the Hall had been saved from demolition and purchased by the Cit…

Artful Learning: Love in the Time of COVID-19
One of Leonard Bernstein’s lasting legacies was his encouragement of the love of learning within all of us—particularly by using the art…

Join us on Friday, June 26 for a live-streamed recital by clarinetist Anthony McGill
Live-Streamed recital to feature Leonard Bernstein's Sonata for Clarinet and Piano 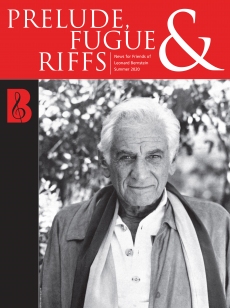 Browse the current and past issues of our newsletter, Prelude, Fugue & Riffs!