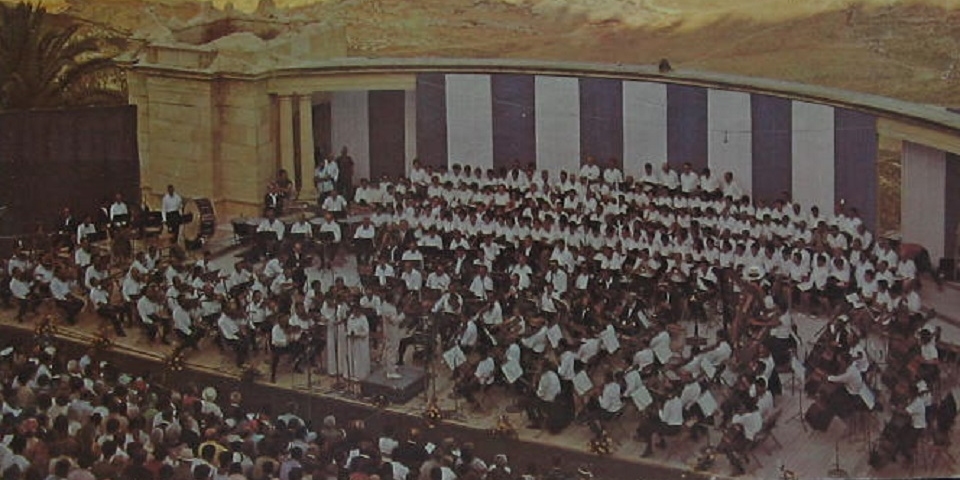 The second half of the 1966-67 season – Bernstein's ninth as Music Director of the New York Philharmonic – was both exhilarating and exhausting. Early in the new year, he conducted his first Verdi Requiem, in a Philharmonic performance commemorating the centenary of Toscanini's birth. In March, he worked for the first time with the exceptional, electrifying young cellist Jacqueline du Pré, who, according to critic Harold Schonberg, upstaged him!

In May, he completed his Mahler cycle with concerts and a recording of the Sixth Symphony. On the same concert program as the Mahler, he led the world premiere of Phorion, by Lukas Foss, friend and colleague since their student days at Curtis Institute of Music. The composition posed difficulties for both Bernstein and the musicians, resolved in late-night discussion with Foss and persuasive rehearsal with the orchestra, producing a brilliant result. But the audience apparently needed its own problem-solving, since it responded with boos.

Close on the heels of the New York season, Bernstein flew to Italy to conduct concerts in Florence (an "intense struggle" to achieve decent results from the Maggio Musicale Orchestra) and Rome, and then on to the Vienna Festival for a Mahler Resurrection Symphony with the Vienna Philharmonic at the State Opera.

Suddenly, world events intervened: on June 5, 1967, the same day as Bernstein's concert in Rome (and Herbert von Karajan's for Pope Paul VI at the Vatican), war broke out in the Middle East. With Israel surrounded on all sides by Arab armies, worldwide concern was great, and Bernstein's no less so, since Israel and its Philharmonic had been profound elements in his life for two decades.

By the time he arrived in Vienna, the Six-Day War was over in triumph for the State of Israel: the Israelis had routed the Arabs and pushed the Jordanian army out of Jerusalem, where it had been since 1948. The Wailing Wall, so vital to Jewish history, tradition and religion, would once again be open to Jews. The title of the Mahler Symphony took on new meaning, and the Vienna performance became a particularly significant event. Bernstein, the Vienna Philharmonic and soloists Hilde Güden and Christa Ludwig contributed their fees to the Israeli Red Cross.

Bernstein was more than ready for the vacation he and his family had long planned in a villa they had rented for July and August in Ansedonia, at the foot of Monte Argentario on the Tyrrhenian coast of Italy. This was the first time that they were not spending their summer in the Berkshires or Martha's Vineyard, or at their home in Connecticut

However, he first had to return from Austria to America to receive an honorary doctorate from Harvard and – fittingly – to conduct the New York Philharmonic in several performances of the Resurrection Symphony for the first Lincoln Center Festival.

Then, on July 1, it was off to Israel. Several weeks before, at the news of the liberation of Jerusalem, Bernstein had offered to lead a concert there in celebration of the city's "peaceful reunification". In the interim, that single concert had become three: two in Jerusalem (one at the Congress Auditorium and one at the Roman amphitheater on Mount Scopus) and one at the Fredric Mann Auditorium in Tel Aviv, the sequence of events was preserved for posterity in a documentary entitled Journey to Jerusalem. 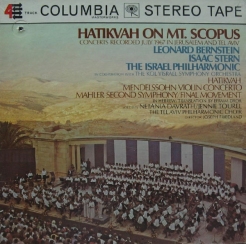 The documentary showed a visibly emotional Bernstein praying for the first time at the Wailing Wall, visiting wounded soldiers in an Army hospital, playing Yiddish songs for them on the piano, and otherwise fully participating in the many aspects of this extraordinary historic and human moment.

On July 9, the most crucial of the concerts took place, the one that would go down in history. Before the War of Independence, the amphitheater on Mt. Scopus had been part of the old Hebrew University campus and the site of many concerts. Now, campus and amphitheater, like the Holy City itself, were liberated, and Jerusalem Mayor Teddy Kollek, an ideological (and idealistic) soulmate of Bernstein, sponsored the concert, announced as "the cultural opening of the united city of Jerusalem".

It was also hoped that the reunification would bring Arabs and Jews together in harmony, and for this goal, all proceeds of the Mt. Scopus concert would go to the Jerusalem Foundation for the Development of Jewish-Arab Youth Activities. In a statement that could have come from Bernstein himself, Kollek said, "Music is the blending of sound, with harmony the essential element. Therefore, it is appropriate that this concert's proceeds be used to create another kind of blending: a human harmony. The funds that accrue today will go to enrich the spiritual, cultural and physical lives of the children of Jerusalem, the Arab and Jewish boys and girls. We give those who have been deprived the opportunities that all children should have. We hope that all the youth of Jerusalem will grow together in perfect harmony."

The program consisted of the Mendelssohn Violin Concerto, played by long-time Bernstein musical ally Isaac Stern, and the final three movements of the Mahler Resurrection Symphony. The vocal soloists were also Bernstein favorites: Russian-American mezzo Jennie Tourel and Israeli soprano Netania Davrath, who had to fly back and forth by helicopter for a dress rehearsal of Madama Butterfly in Tel Aviv. The Tel Aviv Philharmonic Chorus sang, and the orchestra was the Israel Philharmonic, in cooperation with the Kol Yisrael Symphony Orchestra, all of the instrumentalists in shirtsleeves.

Bernstein wore a white linen suit, the jacket in the high-necked Nehru style. He spoke to the audience before the concert began, recalling his concerts in Israel during the 1948 War of Independence: "The idea of resurrection at that time was momentous; after all, this land had just been reborn. But still the ancient cycle of threat, destruction and re-birth goes on; and it is all mirrored in Mahler's music - above all, the expression of simple faith - of belief that good must triumph. En b'rerah! - there is no alternative."

The "Hatikvah," Israel's unfailingly moving national anthem, was even more so than usual: everywhere in the audience, people were in tears. Adolph Green, lyricist (with Betty Comden) of Bernstein's early musical Wonderful Town, was with him on the trip, and commented that despite the menace of land mines, a sandstorm, and strong winds blowing over music stands and blowing away the sound of the offstage brass, "Lenny conducts with a look of almost angelic peace on his face."

Bernstein himself remarked later, "I'm amazed the concert came off so well. Everything was against it: the wind, the sun. But somehow nothing seemed to matter." In fact, for the LP, only that exceptional "Hatikvah" came from the Mt. Scopus performance; the Mendelssohn and the final movement of the Mahler were recorded at the other two concerts, in technological, logistical and physical safety indoors.

From Mount Scopus to Monte Argentario – he finally arrived at the Italian villa ten days after the rest of his family, exhausted but elated and uplifted by his latest Israeli experience.

For anyone who has ever seen the album jacket of "Hatikvah on Mount Scopus", even if decades ago, the photo remains emblazoned on the memory. The amphitheater sits in deep shade cast by the mountain, set starkly against the brilliant sun setting over the desert. The white-suited Bernstein is conducting Mahler, his joy and energy nearly palpable toward the massed musical forces facing him and the rapt audience surrounding them. This image is Leonard Bernstein, the musician and the man.

Bernstein at the Wailing Wall, Jerusalem, 1967.