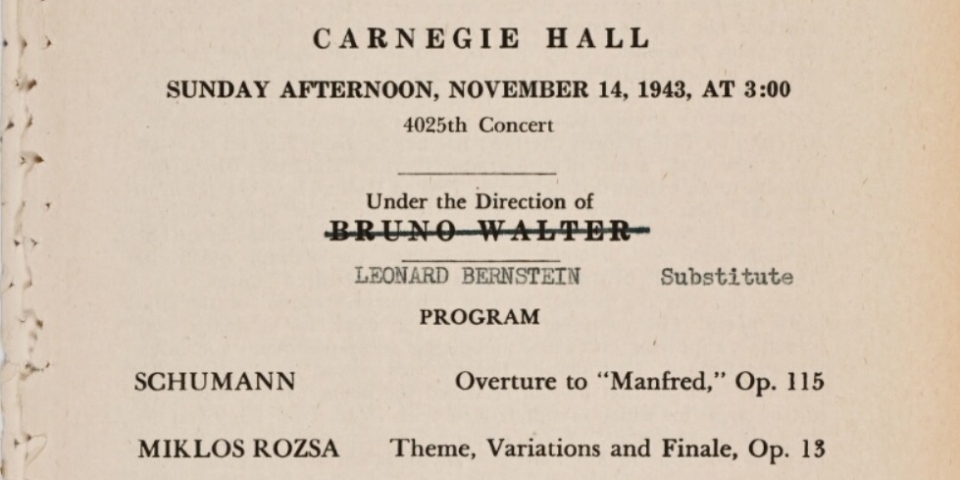 by Leonard Bernstein as told to Burton Bernstein

In what would prove to be one of Leonard Bernstein's last interviews, he reminisced about his conducting debut with his brother, Burton, who was preparing an article for Town & Country magazine on the occasion of Carnegie Hall's centennial in 1991. The interview took place in Fairfield, CT, on November 20, 1989.

There were times when I must have fantasized – you know, one of those days – "Someday, son, this will all be yours," as they say. But I never thought I would have to walk out there [the Carnegie Hall stage] on my own. When it came to the time – that very day – all I can remember is standing there in the wings shaking and being so scared. There was no rehearsal. I had just come from seeing Bruno Walter, who very sweetly and very quickly – wrapped up in blankets because he had the flu – went over the score of Don Quixote with me. He showed me a few tricky spots where he cut off here but didn't cut off there; here you give it an extra upbeat, and so on.

I called Mama and Daddy at the Barbizon to tell them and you [Burton]. And then I just had to hang around. I mean, I was all dressed; when it came to the crunch on that Sunday afternoon, I wore the one good suit that I had, a double-breasted suit. I had until 2:30 p.m. to kill before going to the hall in my sharkskin suit. In that hour or two, I sat in the drugstore [the Carnegie Hall Pharmacy, then located at the street level corner of the building]. I went in for some coffee. The druggist said, "What are you looking so pale about?" and he gave me two little pills, a green and red one. He said, "Look, before you go on, just pop these into your mouth. One will calm you down and the other will give you energy." I put them in my pocket.

The time seemed to hang heavy till 3:00 p.m., even though I had to go over some of the tricky spots in Don Quixote with the cello and viola soloists and the concertmaster. The thing that was obsessing me, possessing me, was the opening of the Schumann overture, which is very tricky because it starts with a rest – the downbeat is a rest. If they don't come in together, the whole concert is sunk. I mean, I can't once go 'bop, bop, bop,' and make sure they can do it. So, this was like a nightmare. I had to go on and do, untried, this thing of such difficulty. You know, I've heard other people come to grief in that opening bar. Then I finally went and talked with the guys and they said, "Good luck." Bruno Zirato said, "Hey, Lenny. Good luck baby." Oh, he was very fatherly and gave me big bear hugs. And that was about it.

As I was about to walk onstage, I remembered the pills. I took them out of my pocket, flung them as far away from me across the backstage as I could and said, "I'm going to do this on my own." I strode out and I don't remember a thing from that moment – I don't even remember intermission – until the sound of people standing and cheering and clapping.

Bernstein thanks the Philharmonic for the opportunity to make his debut with them.