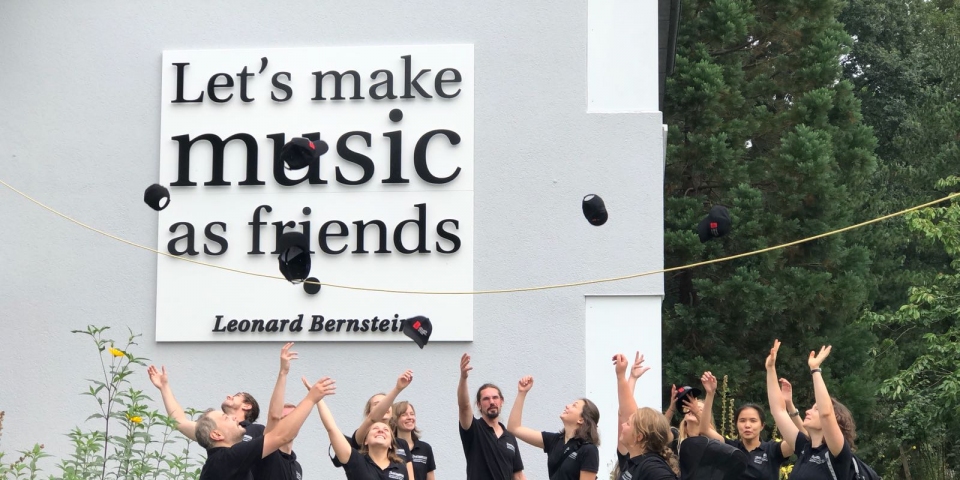 Students at the 2018 Schleswig-Holstein Musik Festival

Leonard Bernstein’s lifelong devotion to education culminated in the late 1980s during the three years he spent as a teacher and a conductor at the Schleswig-Holstein Musik Festival (SHMF) in Northern Germany. At the May 1986 opening concert of the inaugural SHMF, Bernstein conducted the Bavarian Radio Symphony Orchestra and Chorus in a performance of Haydn’s Die Schoepfung (The Creation), which Bernstein himself described as “one of the supreme music dramatizations of all time”. He returned the following year to Salzau Castle where he led the festival’s Orchestra Academy, recreating the mentorship atmosphere of his early years at the Tanglewood Music Festival and passing down over 40 years of knowledge and experience to a new generation of musicians.

The Orchestral Academy complemented the festival’s concert series by giving young musicians the opportunity to work with accomplished professionals. Bernstein used his clout to give the students the opportunity to tour internationally, which he had extensive experience doing as music director of the New York Philharmonic. During his time at SHMF, Bernstein took the students to Germany, Italy, and the USSR (Russia).

“At Flensburg, the first concert took place, at which my students were going to show what they could do with the very difficult ‘Rite of Spring’ by Stravinsky, which is, as everybody knows, one of the toughest nuts to crack in the whole symphonic repertoire. And they did me proud. They were really wonderful. The orchestra was extraordinary. I think everybody gave its all for the Stravinsky.”

Bernstein always challenged young minds and never underestimated their potentialal, and this is especially evident on the repertoire in 1987, which consummated in Stravinsky's “The Rite of Spring”.

Bernstein embarked on a Soviet Union tour with the Schleswig-Holstein Musik Festival orchestra in 1988, marking a return to the Soviet Union 40 years after his groundbreaking New York Philharmonic tour of 1958. Bernstein programmed his own “Songfest” and Shostakovich's Symphony 1 in F minor for these concerts.

The rehearsals for Shostakovich’s First were recorded live and provide insight into his rapport with the students. Bernstein, wearing a pair of sunglasses on the podium, opened the rehearsal with a casual lecture describing a 19-year-old Shostakovich who, having just graduated from conservatory, was now mocking the concept of a symphony.

“Let me tell you about a young Shostakovich…”

During this year, SHMF also initiated a conducting institute in which young conductors had the chance to work with the student orchestra under Bernstein’s auspices.

To commemorate Bernstein’s legacy as an educator and founder of the Orchestra Academy, SHMF created the Leonard Bernstein Award in 2002. As part of its sponsorship of SHMF, the Sparkassen-Finanzgruppe Schleswig-Holstein has been awarding the Leonard Bernstein Award, worth 10,000 euros, each year since its inception and notable recipients of the internationally sought after award include pianist Lang Lang, cellist Alisa Weilerstein, and percussionist Martin Grubinger. The jury committee has included members of the classical music community from across the globe, including Zarin Mehta, Ernest Fleischmann, Jamie Bernstein, Rolf Beck, and Olaf Cord Dielewicz.