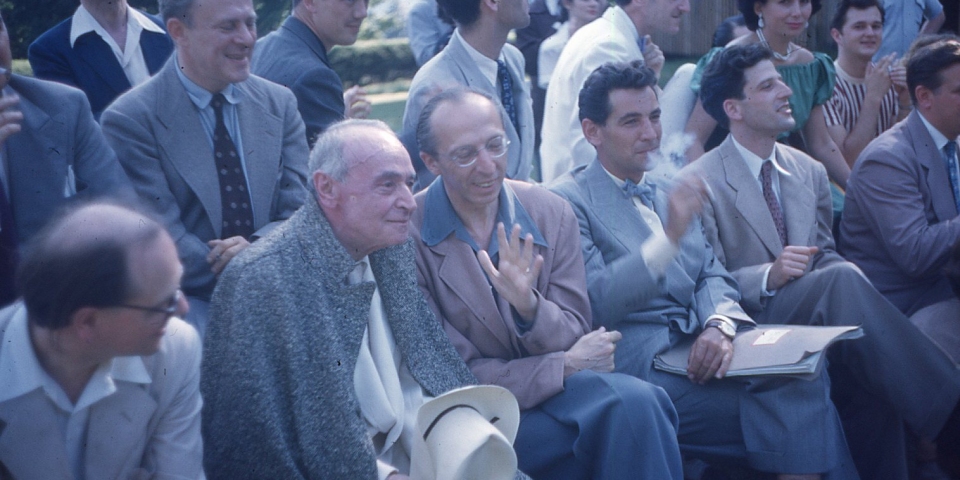 Until 1938, Tanglewood was the Tappan family estate in Lenox, Massachusetts; a sleepy little town in the scenic Berkshire Hills. Ever since the Tappans donated two-hundred acres of land to the Boston Symphony Orchestra, Tanglewood has been known the world over as the orchestra's summer home and the United States' foremost music festival.

With musical director Serge Koussevitzky on the podium, the BSO performed six concerts in 1938 and then again in 1939 to great popular acclaim. But for the 1940 season, Koussevitzky proposed the festival be expanded to six weeks and, most importantly, contain an intensive music training program. Aaron Copland was to be composer-in-residence, Koussevitzky himself was to head the conducting class, and twenty-nine members of the Boston Symphony were to coach the instrumentalists who would form the student orchestra.

Twenty-two-year-old Leonard Bernstein—who had just completed his first year of study at the Curtis Institute in Philadelphia—heard about Koussevitzky's plan and quickly arranged for letters of recommendation from influential friends and professors, including Copland. He gained a meeting with Koussevitzky in Boston, and a few minutes of conversation with Bernstein were enough to convince Koussevitzky to accept the young musician into his conducting class that summer.

The letters below recount Bernstein's extraordinary experience that first summer, studying with the great man who became his mentor and champion. Koussevitzky immediately recognized Bernstein's prodigious gifts and over the course of the summer, gained ever greater confidence in his musical abilities. Bernstein responded positively to the Maestro's warm-hearted teaching style and quickly flourished. Only two years later, Koussevitzky appointed Bernstein as his assistant, placing him on the Berkshire Music Center's august faculty, a status he maintained and cherished until his death.

Bernstein taught and performed at Tanglewood virtually every summer for fifty years where he forged and nurtured some of his most enduring friendships and collaborations. Few places held as profound a meaning for him, and for its part, Tanglewood has always felt enormous pride to count Bernstein among its native sons. His 70th birthday celebration took place at Tanglewood, where many of the world's greatest musicians assembled for an unprecedented tribute. When the Tanglewood grounds expanded in 1994, the new campus was named for him. Nevertheless, it was at Tanglewood, two months before his death in 1990, that Bernstein conducted his last concert. Those who attended that performance of Beethoven's Seventh symphony will never forget its drama, both musical and human, as Bernstein gave his customary dynamic interpretation while gasping for breath throughout. [link to discography]

Since Bernstein's death, Tanglewood has honored his memory with an annual memorial concert.

Bernstein always delighted in working with the Boston Symphony at Tanglewood; but it was teaching that energized him most. Just as Koussevitzky had inspired him in the 1940s, for more than forty years, Bernstein inspired countless young conductors and musicians who studied and played under his tutelage. Today, the tradition endures under the guidance of the music director and musicians of the Boston Symphony Orchestra. Tanglewood continues to nurture and refine young musical talent and offer world-class concert performances in a sublime setting. Koussevitzky's dream has more than come true.

Dubbed “deeply moving” by The New York Times’ Michael Cooper, this rare footage reveals America’s favorite composer and conductor, Leonard Bernstein, in one of his final rehearsals at Tanglewood: coaching the student orchestra in a run-through of Aaron Copland’s Symphony No. 3.

The Bernstein Experience on Classical.org brings you never-before-seen footage of Leonard Bernstein conducting his final rehearsals with the Tanglewood Music Center Orchestra: Aaron Copland's Symphony No. 3 (August 1990). In this clip, Bernstein coaches the violins on how to "casually" bow a section of the fourth movement.

Watch an extended excerpt of Bernstein rehearsing the 2nd movement with the Tanglewood students on Classical.org, official digital partner of the Leonard Bernstein Centennial.

Bernstein wrote this letter to Helen Coates (his former piano teacher) from Tanglewood on July 26, 1940:

So glad to you're better and in Concord. I have a great desire to see people happy when I am so happy myself. The Thompson was a great success, the Bach Double Concerto last week well liked, even very well liked. Tomorrow night I conduct Schéhérzade!

I think the best time for you to come would be the 6th week, when I am doing the marvelous Brahms Variations or a Theme of Haydn. I'm very excited about them, and I'd love you to hear them. As far as I know, that concert will be Tuesday night, August 12 (?) . . . .

Koussevitzky seems to like me more all the time. He now wants me to study with him this winter in Boston. He said today that I will certainly be the greatest (!) conductor if only I will work hard 3 years—that's all. He wants to mold me, etc. He says I have everything for it—of course, I have my usual reaction of self-abasement & get slightly depressed by that sort of confidence, but it's so wonderful here that I disregard it, & work, not even thinking of the horror of conscription that seems to be looming in the fall. No matter—I must work while I can.

Bernstein wrote this letter to Serge Koussevitzky in August 1940, after returning home to Sharon, Massachusetts following his first summer at Tanglewood:

Words are a remote enough medium of expression for any musician but it is especially difficult for me to find words for this letter. Let it be brief.

This summer to me was beauty—beauty in work, and strength of purpose, and coperation. I am full of humility and gratitude for having shared so richly in it. These last six weeks have been the happiest and most productive of my life. I have been able, for the first time, to concentrate completely one my main purpose, with a glorious freedom from personal problems.

It was a renaissance for me- a rehabilitation of the twisted and undefined weltanschauung with which I came to you.

For your creative energy, your instinct for truth, your incredible incorporation of teacher and artist, I give humble thanks. Seeing in you my own concepts matured is a challenge to me which I hope to fulfill in your great spirit.

I am now at home, resting with my family. I hope to be in Lenox within the next few weeks, and I should like very much to see you and talk with you. Can you let me know when this would be best for you!

Please give my very warm greetings to Madame Koussevitsky and to Miss Naumoff.

In devotion, and gratitude.

This letter was written by a young musician studying at Tanglewood on a fellowship made possible by Bernstein:

The Berkshire Music Center recently informed me that my summer fellowship was made possible by your generosity. I am greatly honored to have received this particular fellowship because of the special privilege I had earlier this summer of singing "Tristan und Isolde" with you at Tanglewood and in Philadelphia.

This is my second summer as a fellowship student at Tanglewood; my life has been changed by its unique ambiance and variety of music-making. This is a wonderful place to grow musically—each day brings new joys and insights into the world of music.

I thank you for your generosity in providing this experience which is so precious to me. I am eternally grateful to you.

This letter was written in 1977 by a young flutist in gratitude to Bernstein for giving her the opportunity to spend the summer at the Tangelwood Festival:

I can't thank you enough for enabling me to go to Tanglewood this summer. It has been one of the most important summers of my life, because I was able to concentrate fully on music, without the outside pressures of the Real World. During this process, I decided to pursue an orchestral career more definitely (I almost entered law school this year).

Perhaps some day I can repay you or donate a Fellowship myself. In any case, I am deeply indebted and very grateful for what you have done. In case you didn't know, the Tristan concert turned out to be the best orchestra concert of this summer; the most electric & the most satisfying.

Something I can offer you is a glimpse of the most beautiful spot in Calif., in case you haven't been there—to Carmel—please call us anytime and we can lend you a friend's house . . . .

Once again, thank you for your generous help.

Serge Koussevitzky (music director of the Boston Symphony and founder of the Tanglewood Festival) wrote this letter to the young Bernstein from his home in Lenox on September 5, 1940:

Thank you for your letter.

Nothing could have made me happier than to know that your work this summer has really given you beauty and strength and a better understanding of the gifts with which nature has endowed you.

I shall be glad to see you sometime during the middle of the month,

let us say Tuesday, the 17th, or Wednesday, the 18th,cand I shall look forward to your coming to Lenox.

My best wishes are with you always.

Bernstein with his class of conducting auditors at Tanglewood, Summer 1948

Leonard Bernstein sits at a piano discussing a work while surrounded by TMC students. To his left is conducting student Isaiah Jackson, ca. 1970

Leonard Bernstein conducting the TMC orchestra in a rehearsal in the Theatre Concert Hall, ca. 1975

Leonard Bernstein works with Marin Alsop, a conducting fellow at Tanglewood in 1988 and 1989