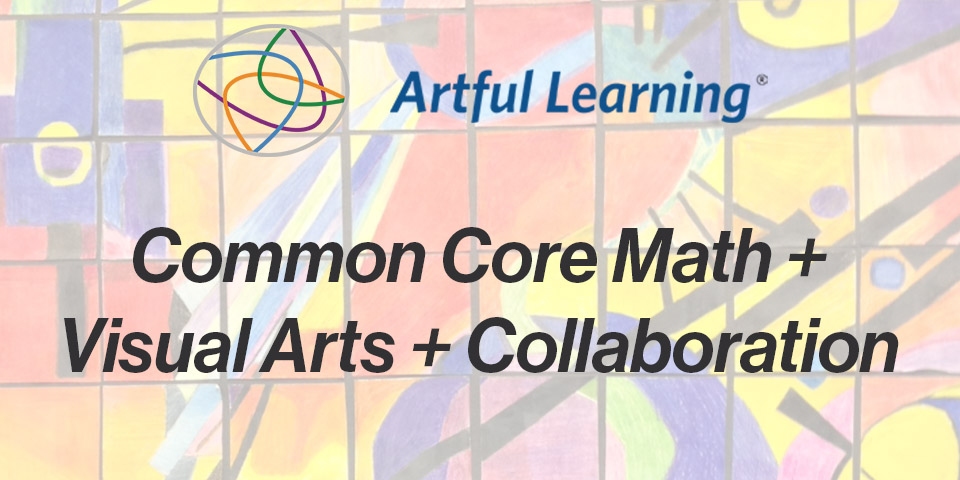 One of the most frequently asked questions posed by educators working with arts integration is, "I love all of this, but how does it work with Math?" While connections to Science, Social Studies, and English may be more immediate - knowing how Mathematics works, and the inherent properties that all students need to know and can apply - provides many possibilities to explore those concepts with dramatic outcomes. Not only are the examples visually stunning, but they also function as an assessment measure to evaluate and gauge student understanding. We also model this with educators during our summer professional learning intensives, developing their ability to work with the strategy and determine how they will integrate into their curricula and Units of Study.

Vignette | Common Core Mathematics | Grade 10 | Illinois
High School students tasked with enlarging an abstract expressionist painting using the Artful Learning | Arts-Based Skill & Strategy of Grid Drawing had to put the Common Core Mathematics concepts of Perimeter, Area, and Scale into practice. Four different Geometry class periods, involving 64 students, respectively, had three days to take a 1" square segment of a watercolor painting by Barbara Masof Junior titled Tribute to Kandinsky and enlarge, with accuracy, to a 4" square. Using Prismacolor pencils, heavyweight drawing paper, and a pencil for 'ghosting-in' smaller guides and incremental marks - each class had to work independently of the other to re-create the painting. What makes the challenge so audacious was the choice of art. Geometry teacher Megan Luke explained, "I could have chosen a more straightforward piece, with consistent lines, flat colors, and large geometric forms that would have reduced the complexity involved." Over the past two years, students' artistic fluency at the high school improved due in part to having Visual Arts as part of their daily learning, so they were adept at blending and shading, using a more complex work as a guide. Luke continued, "the anamorphic shapes, vibrant color palette, and unfamiliarity with the artist and painting - made it harder for students to just "dial it in" at the last minute."

And each class was committed to getting it right - knowing they were part of a larger whole and did not want to be the weak link or the vulnerable class period that ruined the outcome. Students were assigned to complete their grid piece independently of each other, using only Common Core Mathematics and Color Theory to enlarge and reproduce their square. Since the four classes met at different times during the day, in various areas in the school - the only typical times' EVERYONE had together were their school-wide, ten-minute break, and lunch. And that was where something unusual occurred. Due to a volatile, inner-city, and widely diverse racial population - these large groupings of teenagers often resulted in suspensions and expulsions due to near, continuous fighting. Luke elaborates, " I could not believe what I was witnessing." "Students collaborated - helped one another by comparing their squares, making modifications, and yes, even refinements to the point of starting over to make sure their piece was accurate and lined up with the other surrounding squares." "Every one of my four classes worked together of their own volition!" Students still had to work on their grid pieces as homework to complete them in time and at a presentation level.

The day of the reveal was electric. Students added their grid pieces during their own class time - followed by a discussion of what was enjoyable, what was challenging, how they used the Mathematics concepts, and where to make refinements. Passing periods jammed the doorway, late passes to their next class written, and an after-school hang-out occurred as each previous class wanted to see how the others before had done. Students were incredibly proud of their finished piece using Visual Arts techniques, Common Core Mathematics, and focused collaboration to elaborate on their newfound and useful knowledge while making new friends. 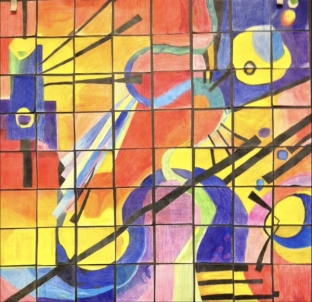