Ragtime, they called it then, a half-breed music, bred in New Orleans out of African drumming and French military marches and Polish polkas. What did it have that was so enticing—the blue notes, the syncopations, the trombone smears? No. You can't reduce it to its technical components. The thing that made it irresistible was that it had life; it was fresh and vital—it swung. Which was just what the doctor ordered for the jaded European musician who could no longer digest the heavy German cooking of Wagner, Reger, Pfitzner, and company. This was spicy, light, effervescent; it was Sal Hepatica.

By 1912 ragtime was in solid. There was a steady stream of rags flowing out of Tin Pan Alley. Look at some of these. (See Image Gallery) "Sunflower Rag", "That Demon Rag", "That Fellow with the Cello Rag", "That Puzzlin' Rag", "Another Rag", "The Madhouse Rag", "That Fussy Rag" by the author of "That Lovin' Rag".

Let's look at one of the great ones, in fact the first one to appear. It's called the "Maple Leaf Rag":

Now just what makes this a rag? Well, first of all, it's a march, as you can hear in the accompaniment:

But over that accompaniment there's nothing anyone ever marched to before: bright, jolly, syncopated figures that make you want to dance, not march:

Its essential color is that of the honky-tonk piano; it couldn't sound better played by the greatest orchestra on earth; it belongs to the barroom:

As far as its form is concerned, it's the same as any march, with contrasting trio, or middle section:

That's all there is. There's no hint of blue notes or of any of the jazz paraphernalia that was later to become so important; just pure, naive, high spirits.

Now, imagine how sweetly all this fell upon the ears of those new European composers, especially the ones in Paris, who were so eagerly seeking fresh, non-Wagnerian waters like Erik Satie, Debussy, Ravel, Martinů, Milhaud, Tansman, Stravinsky. They all grabbed at this new exotic tonic, drank it up, injected it artificially into their own personal styles and vocabularies, and out came music that was closer to the Moulin Rouge than to the Musikfreudegesellscaft. For example, here's a ragtime from Satie's ballet, Parade, which is just about two steps beyond the "Maple Leaf Rag." It could almost be an authentic original, but every so often there appears some complexity or unexpected turn that reveals the hand of a sophisticated European composer. 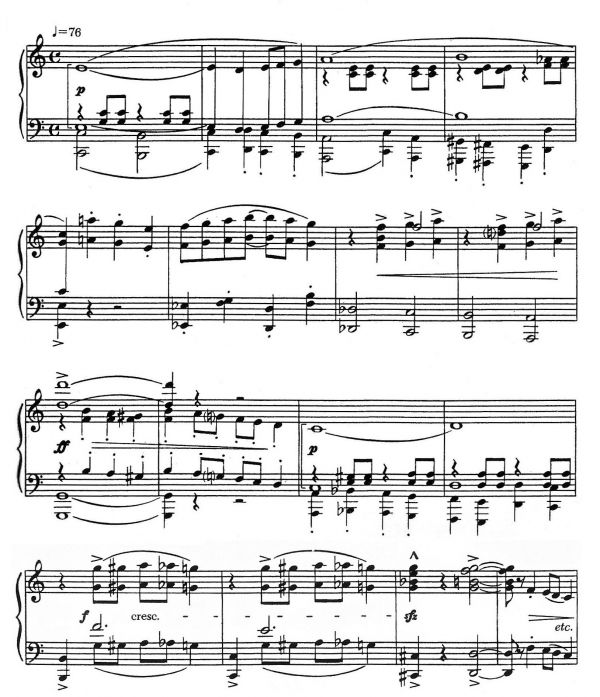 You see what I mean? That couldn't be Tin Pan Alley, nohow. But this is nothing compared to the sophisticated treatment the rag got from some European composers. Stravinsky turned out no fewer than three ragtimes, one more complicated than the other, none of them even vaguely comprehensible in New Orleans or in Tin Pan Alley, but still born of ragtime. Here's a bit from Stravinsky's "Ragtime for 11 Instruments," one of which is that most unraggy Hungarian instrument called the cimbalom. Try to imagine, as you hear it, what fun Stravinsky must have had writing it back in 1918.

(This script in its entirety can be found in The Infinite Variety of Music.)