From the Charles Eliot Norton Lectures, presented with the Boston Symphony Orchestra and the Vienna Philharmonic Orchestra. This lecture was broadcast on 11 January 1976 on PBS. Original lectures took place in 1973.

What we're trying for is a high overview of musical development in terms of a vocabulary constantly being enriched by more and more remote and chromatic overtones. It's as if we could see the whole of music developing from prehistory to the present, in two minutes.

Let's again pretend we're hominids, and that the smash hit of the moment is, say, "Fair Harvard." Here we are, in our hominid hut, crooning:

Now maybe our wives, and maybe our prepubescsent sons, join in, and automatically we're singing not in unison but in octaves, since men's and women's voices are naturally an octave apart.

happens to be the first interval of the harmonic series, if you remember. Do you?

Centuries pass, and inevitably the next interval of the harmonic series is assimilated by humanity, namely the fifth:

And now we can be singing: "By these festival rites from the Age that is past . . ."

Of course, this little change brings us forward a mere ten million years, into the tenth century A.D., and into a fairly sophisticated musical culture. But now we admit the next interval of the series, the fourth:

so that we can mix intervals of the octave and the fifth and the fourth:

Again comes a great leap, as music absorbs the next overtone, acquiring the interval of the third. Just listen to the difference.

It's a whole new music, richer, mellower, with a new coloristic warmth. (I must admit I like the older sound better.) As we know, this new interval of the third introduces into music the phenomenon of the triad:

And so there is born what we now call tonal music, a stable tonal language firmly rooted in the basic notes of the harmonic seris, the fundamental:

and its first different overtone, the fifth:

Now and forevermore to be known as the tonic: 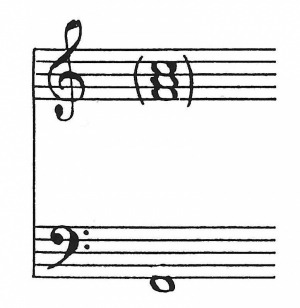 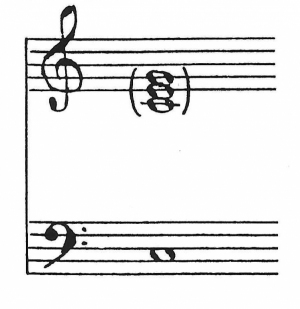 Back to Norton Lecture Directory
Come On, Deliver...
the latest Leonard Bernstein news... to me!