Lecture 4: The Delights and Dangers of Ambiguity

From the Charles Eliot Norton Lectures, presented with the Boston Symphony Orchestra and the Vienna Philharmonic Orchestra. This lecture was broadcast on 8 February 1976 on PBS. Original lectures took place in 1973.

Excerpt: Ambiguity in Mahler's Adagietto (from Symphony No. 5)

Similarly, in our second lecture on syntax, we found new ambiguities in Mozart's G-minor Symphony, if you recall, arising from violated symmetry, deep-structure symmetries which were converted by linguistic transformational procedures into beautifully ambiguous surface structures. We were then in a position to recognize, and even account for, certain musical phenomena whose beauty depends on ambiguous procedures.

For instance, do you recognize these bars? 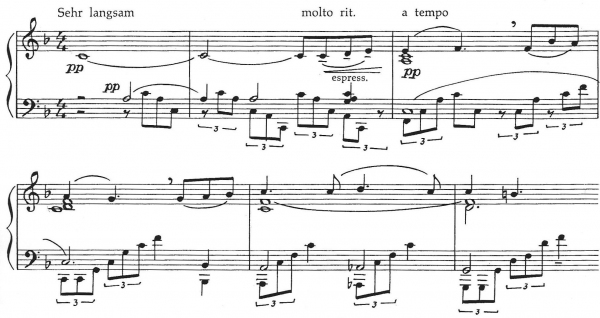 The whole world has been swooning to this Adagietto from Mahler's Fifth Symphony ever since "Death in Venice" invaded the silver screen. Why the swooning? After all, it's nothing but a dominant leading to atonic - three conventional upbeats in F major leading to an appoggiatura downbeat which then resolves, again in the most conventional way. 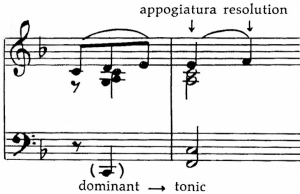 (Do you remember about appoggiaturas from our Mozart analysis - those "leaning notes", dissonant tones that bear a special weight and tension which must be resolved, notes that lean on their resolutions? Well, this is one of them; and it does resolve, as you see, just as conventionally as in Mozart.) Then what's the magic secret? Ambiguity, as if you didn't know.

You see, all that preliminary vamping on the harp is first of all syntactically vague.

We have no idea what beat we're on or what meter we're in, and already that's one ambiguity. What's more, this is setting up the key of the piece, F major, by suggesting its tonic triad, but only suggesting it, because the fundamental note, the root of that trida, F itself, is missing.

Only two-thirds of the triad is given us, the A and the C, roaming through several octaves, it's true, but still only two different notes. So we're not yet really sure that our key is going to be F major. It's exactly like that kid's teasing chant that we examined for its universality in our first lecture. You remember?

Those two notes. And do you remember how we found that the tonic fundamental of those two overtones is not sung but is present by implication only?

Well, that omission, the absence of this tonic makes us only possibly aware of F major, because the two notes we hear

could turn out to be two-thirds of a whole other triad, namely this one, A minor.

Automatically we are facing another ambiguity: which of these keys are we in?

And that ambiguity in itself lends a certain extra poignancy to the teasing-tune of the kids, because it makes it almost more hurtful, due to the implication of something else, something which could be rather nasty.

Of course, our beloved Mahler isn't nasty at all; quite the contrary. But the principle is identical, because again, which of the two keys are we in? 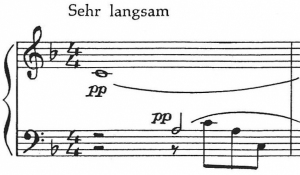 As the three upbeats begin, we'd almost vote for A minor because there's that A in the cello part, which is the loswest part.

But no, it sneakily descends to G, and then to F - oh, it feels so good. We're home, in F major; but there's still an unresolved tug-at-the-heart in that appoggiatura up there in the melody, and when it resolves we just melt away, with the pleasure of fulfillment.

Amazon The Unanswered Question - Six Talks at Harvard Buy the DVD Box Set Back to Norton Lecture Directory
Come On, Deliver...
the latest Leonard Bernstein news... to me!