From the Charles Eliot Norton Lectures, presented with the Boston Symphony Orchestra & the Vienna Philharmonic Orchestra. This lecture was broadcast on 15 February 1976 on PBS. Original lectures took place in 1973.

To use simpler language, both Stravinsky and Schoenberg were after the same thing in different ways. Stravinsky tried to keep musical progress on the move by driving tonal and structural ambiguities on and on to a point of no return, as we will see next week. Schoenberg, foreseeing this point of no return, and taking his cue from the Expressionist movement in the other arts, initiated a clean, total break with tonality altogether, as well as with syntactic structures based on symmetry. It's interesting to note that Schoenberg was also a talented painter. This is one of his self-portraits: 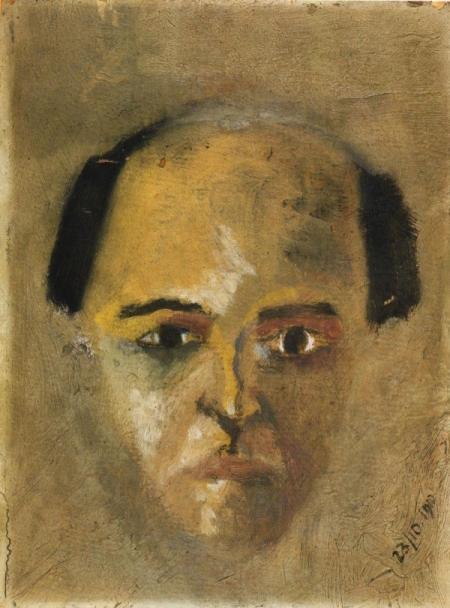 And in those early years of the twentieth century, he was making the same kinds of experiments on canvas as he was making on music paper.

Actually, this painting isn't half as Expressionistic and Kokoschka-ish as he got a year or two later, but that's the only slide I could find for the occasion. But still, it tells you what I mean, doesn't it?

Now, we've already referred to some of those early experiments, in Opus 10 and 11, where the break was made and free atonality came to be. But the clincher was Opus 21—that wild and spine-chilling masterpiece of expressionism called Pierrot Lunaire. This is a cycle of twenty-one weird poems by Albert Giraud—"Thrice Seven" poems they're called—set in German for voice and a small group of instruments. In the course of it, Schoenberg not only goes over the cliff tonally, but introduces a new ambiguous wrinkle, which he called Sprechstimme, whereby the singer doesn't exactly sing. That is, each vocal note is clearly indicated, but the singer, having once attacked that note, must immediately let it fall or rise, as in speaking, producing something halfway between singing and speaking. And this is indicated by those crosses in each note of the vocal line, on the note stems.

In other words, if you can remember back four lectures ago to our discussion of heightened speech, the ictus of a syllable such as "MA" is not prolonged into a note but allowed to glide away, downward in a statement or upward in a statement or upward in an interrogative (MA↘ or MA↗). Sprechstimme naturally strikes yet another blow at tonality, and lends a new spookiness to the music. For instance, one of the songs is entitled "Der Kranke Mond", The Sick Moon. It's written for voice and flute only and begins like this: 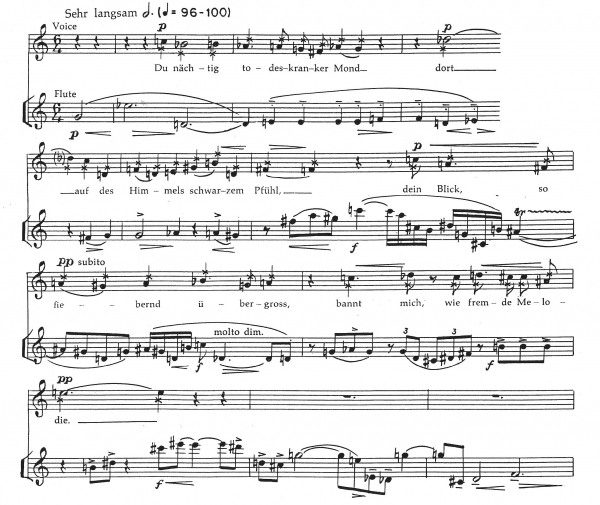 I wouldn't dare try that in public if were not for the fact that my naturally out-of-tune voice lends itself to Sprechstimme. When I sing normal music, it comes out as Sprechstimme. In any case, it was soon to become clear that free atonality was in itself to become a point of no return.