featuring the Symphony of the Air
(Broadcast Live on the CBS Television Network, 14 November 1954)

(The twelve players take positions at indicated points of score painted on floor.)

The full orchestra, of course, is made up of these twelve instruments multiplied anywhere from two to eighteen times. 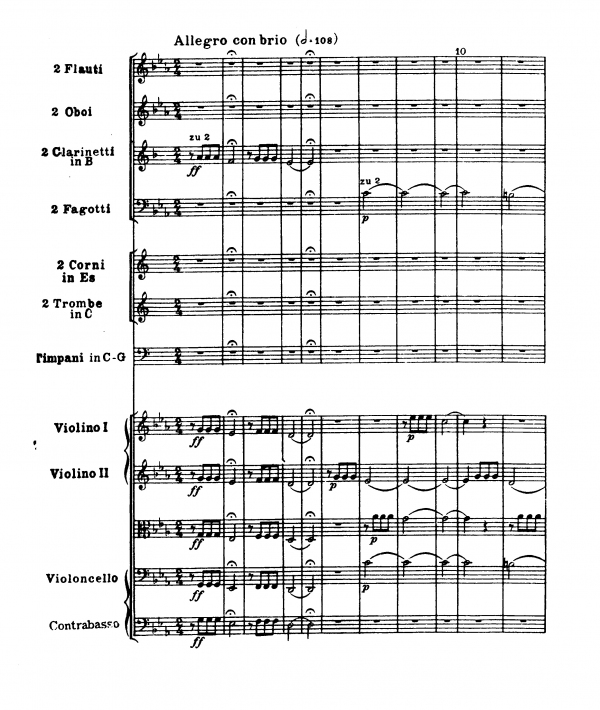 (The musicians slowly walk across the page of music.)

As the conductor views this score, his eye has to follow all the instruments simultaneously across the page.

However, for his opening bars, Beethoven did not wish the entire orchestra to be playing. And so he dismissed five instruments: the oboe, bassoon, horn, trumpet, and timpani. Here is the original manuscript as he started it, with the remaining seven instruments accounted for: 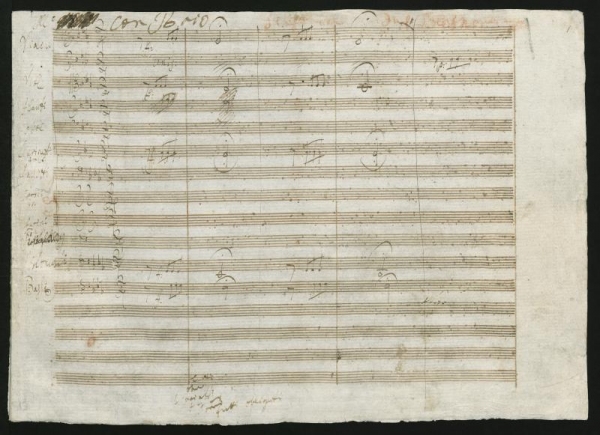 But note that there is again something crossed out, the part of the flute. So we know that Beethoven, for one second, was going to include the flute. Why did he cross it out? Simply because the high, piping notes of the flute don't seem to fit into the generally rude and brusque atmosphere of the opening bars. Beethoven clearly wanted these notes to be a strong, masculine utterance, and he therefore orchestrated entirely with instruments that play normally in the register of the male singing voice.

(Orchestra plays first with the flute, then without it.)

The flute, being the instrumental equivalent of a soprano, would be intruding here like a delicate lady at a club smoker. So out came the flute.

You see, a lot of us assume, when we hear the symphony today, that it must have spilled out of Beethoven in one steady gush, clear and right from the beginning. But not at all. Beethoven left pages and pages of discarded material, similar to these, in his own writing, enough to fill a sizable book. The man rejected, rewrote, scratched out, tore up, and sometimes altered a passage as many as twenty times. We can see some of these alterations in this facsimile of the original orchestral manuscript score: 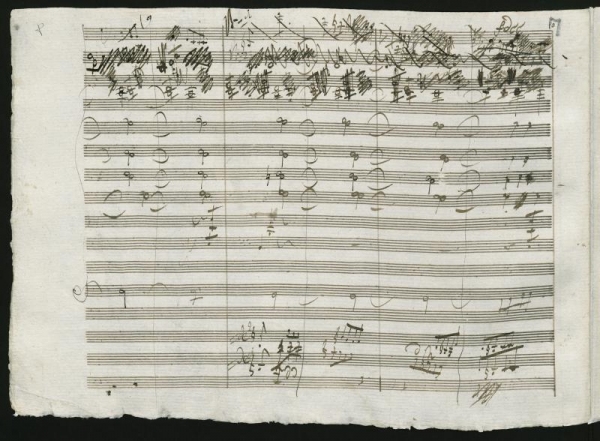 Look at those agonized changes, those feverish scrawls. Here is a passage: 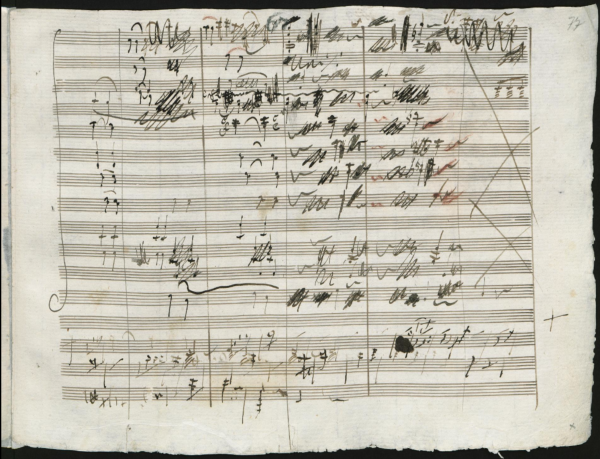 that has been corrected so many times that there is no longer room for the final version. So he had to put that in as a footnote at the bottom of the page, and left it up to his copyist to figure out what he really meant.

I admire and pity those copyists.

[The entire script of "The American Musical Comedy" can be found in the book "The Joy of Music".]

The full score of Beethoven's Symphony No. 5 in C Minor can be viewed in the Staatsbibliothek zu Berlin's Digital Collection.