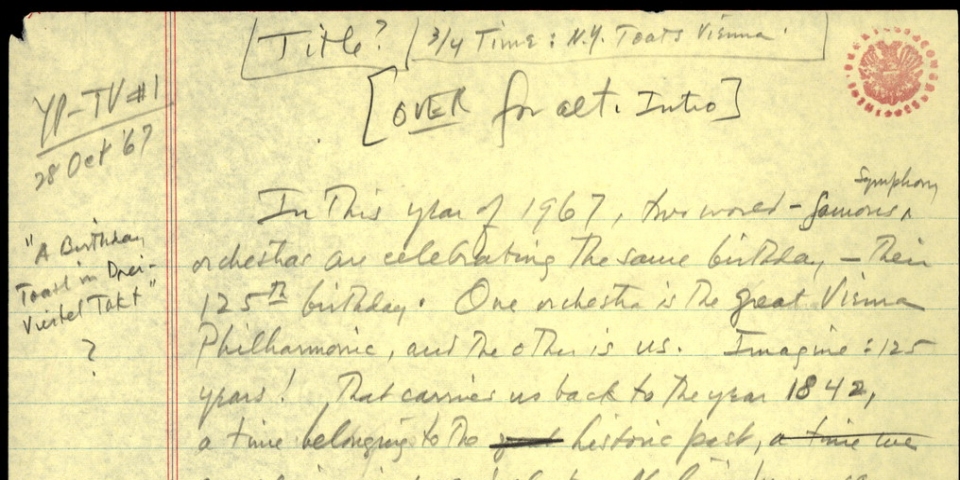 My dear young friends: Greetings, and welcome to another season of Young People's Concerts. In this year of 1967, two world-famous symphony orchestras are celebrating the same anniversary—their 125th birthday. Imagine, one orchestra is the great Vienna Philharmonic and the other one is us. If you can imagine: 125 years! That carries us back to the year 1842, beyond the recall of any living person. And yet, in that year of 1842 were born two orchestras that are still alive and not only alive, but bigger, better and more beautiful than ever.

So you see, we two orchestras are fraternal twins, brother-orchestras (or sister-orchestras: I never know which), but whichever we are, we are naturally exchanging birthday gifts. The Vienna Philharmonic led off, some weeks ago in this very hall, by presenting a special concert for the benefit of our pension fund; it was a gala occasion which opened our current season. And what's more, during the intermission of that concert they presented us with their golden Ring of Honor, and I am proud to be wearing it today at this concert, which is our birthday present to them. I don't know if you can see it, but there it is. We will honor the Vienna Philharmonic today by playing their music—the music of their city, the music that has formed their long and noble tradition.

What exactly is Viennese music? Well, it's a number of things, but I'm sure the first thought that springs into your minds is the waltz, the Viennese waltz, as perfected and popularized by Johann Strauss. And that's not a thought to be ashamed of either; even though a Strauss waltz is frankly popular music—the pop music of its time—it condenses in itself the very essence of Viennese music: That certain sweetness, or rather that special bittersweet quality that the whole world loves so much in Viennese music whether it be by Mozart or Mahler or Alban Berg. And when we hear a Strauss waltz we are hypnotized by the elastic charm of its phrasing, the teasing lilt of its rhythm, those little hesitations and pauses, those swooning upbeats, and the irresistible momentum of its pulse. It's a marvelous invention, a Strauss waltz, so let's not be snobbish about it; let's start our Viennese birthday celebration with unashamed gaiety and sentiment by playing one of the great Strauss waltzes—Wiener Blut.

That Strauss waltz may well be the essence of the Viennese spirit, but in all seriousness we must admit that it doesn't go very deeply into the Viennese soul. Let's say that it represents Vienna faithfully, but superficially. When we come to speak of Viennese music in terms of the symphony orchestra—especially one as noble as the Vienna Philharmonic—we must start thinking of a whole other list of names. Actually, the great composers of Vienna present themselves in three groups. The first (pre-Johann Strauss) is a group of four tremendous names: Mozart, Haydn, Beethoven and Schubert. Incredible names, and these are the patron saints of Vienna, the holy forefathers. And a few decades later began a new period of glory, a new group of four new tremendous names: Brahms, Bruckner, Mahler, and Richard Strauss. (No relation to Johann.) And this blessed foursome takes us right up to our own century, and to the latest trio of world-shakers in Vienna: Schoenberg, Berg, and Webern.

Now that is a formidable list of names. And obviously we can't plough through all of them in this one concert, but we can play some of their magic, and recall some of the moments of their glory. And I propose to do this not in a schoolteacherish way (after all, this is a birthday party) but rather in the spirit of Johann Strauss, in terms of that magical Viennese formula known as Drei-Viertel Takt, which means three-quarter time. We've already started with 3/4 time in our waltz. Let's stick to it and see how it is used by some of the immortals of Viennese music. And I think you'll find it fascinating stuff.

Take Mozart, for example. Now there was no such thing as a waltz in Mozart's time, but the seeds were there from which the waltz was going to spring. These seeds came in two varieties: one, the rustic peasant dances variously known as German dances, country-dances, or Ländler—that's a marvelous word, Ländler, meaning from the land, or of this earth, or countryside. Rustic. The Ländler still lives on in those hip-slapping numbers that Tyroleans and Bavarians still perform with such glee in quaint movies and restaurants: (I'm sure you've all seen them) hup-tsa-tsa, hup-tsa-tsa. At any rate, you can't fail to notice that they are in three-quarter time.

Now, the other variety is the exact opposite of this: The elegant, aristocratic court dance known as the minuet. One, two , three, one, two, three. No hup-tsa-tsa here. How very courtly. Now Mozart availed himself of this minuet form to a large degree, but (being a good Austrian countryman as well) he made equal use of the old rustic Ländler. So, first we're going to play you a Mozart Ländler and then a Mozart minuet, so that you can hear the difference. This Ländler we are going to play is Mozart's most famous one, with a particularly charming middle section that features sleigh-bells, suggesting a winter scene in the country, sleigh ride and all. Here it is.

Okay, that is one side of Mozart in three-quarter time, the lusty, earthy Mozart we know so well from his private letters. But Mozart was also elegance itself, a natural product of the sophisticated and gracefully mannered court life of his time. And this grace is reflected in all his music, especially in his minuets. It had become the custom in Mozart's time to include a minuet in every symphony, just before the last movement. This minuet had to be in a definite form: A simple three-part structure in which the first part and third part were identical. And the middle section is known as the Trio, because originally, in the old minuets, it used to be played by three solo instruments, a trio. That's no longer true, but the name "Trio" has stuck, designating the middle section of a minuet, or a march, or a polka, or whatever. So the whole thing is in a very clear A-B-A form, which you may now easily follow as we play you the graceful Minuet movement from Mozart's Jupiter Symphony.

There's quite a bit of difference between those two Minuet dances, isn't there. Well, there you have a picture of the state of three-quarter time back in 1788 in Vienna. But it didn't stay that way for long: For example, Haydn, in his symphonies mixed together the two styles of minuet and Ländler, winding up with something more hearty and robust, yet still a symphonic minuet, a movement of a symphony. But greater, even wilder changes were in store for this Drei-viertel movement. Because along came Beethoven, the mighty adventurer, inventor, enlarger, changer of all things. And in his masterly hands the minuet becomes almost unrecognizable because it was fantastically speeded up to a point where it can no longer even be called a minuet, but instead a scherzo, which as you know is the Italian word for joke. So, what used to be the lilting minuet 1-2-3, 1-2-3 had now become the 1-2-3, 1-2-3 in wild tempo of the scherzo. Now we're going to play for you one of Beethoven's most brilliant scherzos, the one from his Seventh Symphony. I think you'll find it hard to believe that this gutsy, racy music had its origins in the old mincing dainty minuet.

And now, as an "authentic Viennese touch" to our birthday party, we have a wonderful surprise: A visit from two of the most celebrated opera singers in the world today, Christa Ludwig and Walter Berry. They come as a pair because they are a pair; they're husband and wife in private life, and I hope they won't be offended if I refer to them as the Berries. And, believe me, they are the berries. What's more, Walter Berry is a born and bred Viennese, and Christa is one by adoption. And of course they are going to sing Viennese music—what else?—three delicious songs by Gustav Mahler, and all three, naturally, in triple time. Mahler, as you know, was the last of the great Viennese symphonists, and you may be somewhat surprised to discover him also a great songwriter. In fact he was, and many movements of his symphonies are based on his songs, sometimes note for note. It's particularly appropriate to have Mahler sung on this birthday program, because not only was he one of the immortal Viennese composers, but also one of the finest conductors of all time, and in this conducting role he provides one of the strongest links between our two birthday orchestras, since he was at one time or another chief conductor of each of them. Mahler is a name we two philharmonics of New York and Vienna share with great pride.

Now these three songs of his we're about to hear all take their texts from a famous collection of German folk poetry called Des Knaben Wunderhorn, which means The Boy's Magic Horn, and they're all humorous, sweet and rustic—just perfect for the kind of Ländler music that Mahler supplies. The first one, called Rheinlegendchen, or A Little Legend of the Rhine, is a tiny fantasy of a girl who throws her sweetheart's ring into the Rhine River. And the ring is swallowed by a fish, then the fish is caught and served up to the king, who finds the ring, which the sweetheart then retrieves and brings back to her. What a tale.

The second one tells of St. Anthony of Padua, whose sermons no one would come to hear, so he went and preached to the fishes, all of whom flocked to hear him, adored the sermon, and swam away just as happy, dumb, and sinful as they had come. And the third and last song is a little hillbilly dialogue in dialect, called Verlorene Müh, or Wasted Effort. In this charming little scene, a rather aggressive maiden is offering a rustic lad her company, her food, and heart, in that order, but the fellow is definitely not having any. And there you are. The first song will be sung by Miss Ludwig, the second by Mr. Berry, and the third by both Berries. We are very proud to welcome them now.

Pretty good stuff, the singers and the songs, I think. You know, off hand it would seem like the worst kind of program making in the world to have every piece on a program be in triple time, and yet somehow one never tires of it. There has always been something especially fascinating about triple meters and rhythms, even going back to earliest times in history, probably because the principle of three beats in a bar is so foreign to the natural impulses and construction of the human body, which is duple: We have two eyes, two hands, two ears, two legs; we go left, right, one-two, one-two. Everything we do is in twos. But Drei-viertel Takt is in three - 1,2,3 - and is even more fascinating when the Viennese get hold of it and give it that special swing, that lift - 1,2,3, 1,2,3. The Viennese touch. And certainly the top example of this touch is to be found in the waltzes from Richard Strauss's opera Der Rosenkavalier: These waltzes are practically the national anthem in Vienna, and our birthday party would not be complete without them.

So here they are—our farewell bittersweet toast to our well-loved brother, the Vienna Philharmonic.