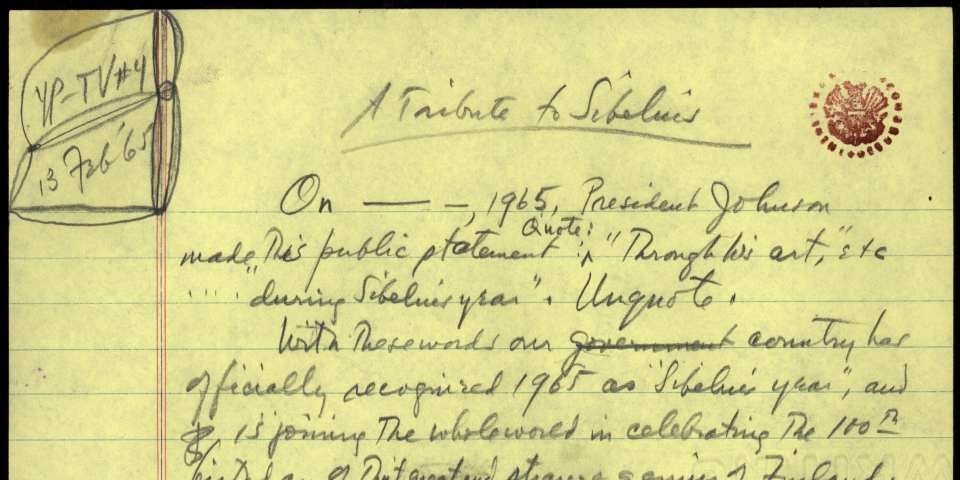 A Tribute to Sibelius

Greetings one and all. This year, through a public statement made by President Johnson on New Year's Day, our country officially recognized 1965 as Sibelius year; and so we join the whole world in honoring the memory of the great Finnish composer Jean Sibelius, on the 100th anniversary of his birth.

Sibelius was a great and strange kind of genius, and to understand him fully would take much more time than we have here today. But perhaps the best way to begin to understand him is by listening to his most famous single composition, Finlandia.

I must tell you that Finlandia is famous not only for strictly musical reasons—although for a short work it is musically very stirring and passionate indeed. But what underlies the music is another kind of passion: the passion of patriotism. You see, at the time Sibelius wrote Finlandia, around 1900, his country was not free; its government was controlled by Czarist Russia, and its cultural life was still mostly dominated by its other neighbor, Sweden. In fact, all educated and literary people in Finland had for centuries spoken not Finnish, but Swedish; while the old Finnish language was considered vulgar—a language for peasants.

But during the nineteenth century this language of the people had begun slowly to be accepted and to acquire a dignity of its own; the ancient Finnish epics and sagas began to be regarded as important literature—not just provincial folk tales. And the people began to be proud of their poetry, their old folk songs, their own national heritage. Now all these things were signs of a revolution that was boiling up under the surface: a double revolution, against Swedish culture on the one hand, and Russian political power on the other.

This Finlandia by Sibelius, like many other pieces of his, was a part of that national revolution; and in fact it proved to be so exciting to the Finnish audiences, with its warlike rhythms and its inspiring, hymn-like middle part, that for a while the Russian authorities had to forbid performances of it.

It was like dynamite; and we are told that it did more to bring about Finnish independence finally than a thousand speeches and pamphlets. And so we play it now, in honor of Sibelius and of the free people of Finland.

During our auditions for the Young Performers' program last month, a young man of twenty named Sergiu Luca took the stage, and poured forth the first movement of Sibelius's Violin Concerto with such fiery emotion and brilliance that we decided not to present him on our Young Performers' Concert, but to save him for this Sibelius program and let you hear him play that same first movement in the extraordinary way he does. This Violin Concerto of Sibelius has no subtitles or special meanings, the way Finlandia has; but it is filled with just as much nationalistic character and patriotic fervor.

Mr. Luca, by the way, has had a rough life, nationalistically speaking. He was born in Romania, grew up in Israel, and has lived in England, Switzerland, and the United States. Anyone with that kind of history must have strong nationalistic feelings of his own to communicate to us.

And now we come to a Sibelius masterpiece; his Second Symphony in D. To the Finnish people, this Symphony is just as much a patriotic piece as Finlandia is. For them, and for many people all over the world, the Second Symphony carries the meaning of freedom—the triumph over oppression. This is partly because the music sounds so deeply nationalistic. Not that Sibelius uses actual Finnish themes or folk song: He himself once said that he never used a single real Finnish folk song in all his music. But somehow his themes sound like folk songs; they sound Finnish and they seem to grow out of the Finnish language itself.

But there's much more to a Sibelius symphony than just nationalism. The special fascination of this music comes from the suspense in its construction, just as in a great detective story: Sibelius is like a fine mystery writer, who plants clues for you right from the beginning—clues that point the way, or sometimes puzzle you, but always keep you panting for the next one. And in the end they all link up, so that when the final light dawns, and all is made clear, you feel the thrill of having solved a great mystery, you yourself.

Now I wish I had time to show you how this works all the way through this Second Symphony of Sibelius; but maybe I can take a few moments to give you some idea, by tracing only one single thread of this tangled mystery through the course of its four movements.

The thread I have in mind is simply a string of three notes, in their ascending order of the scale, like this:

[ALL remaining music: Symphony no. 2]

Couldn't be simpler. Now this clue of three notes is planted immediately at the beginning of the first movement, as an accompaniment idea, sort of a vamp-till-ready. It sounds like this:

Now over that accompaniment figure appears the first main theme; and lo and behold, it is again built out of three notes of the scale, only in descending order, as if contradicting the first clue, like Three Blind Mice:

Now here is the accompaniment, with the theme on top of it.

Now obviously Sibelius is trying to tell us something with these two related but contradictory clues: Maybe what he is trying to tell us is that perhaps a solution of this complicated mystery case can be found by investigating a few simple notes of the everyday scale. It seems crazy. Maybe it's impossible. Let's find out, by following further our thread of clues, each one being a version of those first three scale-notes, whether upwards or downwards, repeated or rearranged or expanded, or something. For instance, later on in this first movement you hear the notes on plucked strings, growing from three to five notes, from soft to loud, expanding, like a rising flock of birds like this:

And then suddenly these same notes double in speed, buzzing away like a gigantic swarm of insects. And it sounds like this:

And that's all made out of those same three little old notes. And so on throughout the first movement, those three innocent scale-notes turning up in a hundred different disguises. And, in fact, this happens all through the symphony. For instance, the main theme of the second movement features those same rising scale-notes—only four of them, this time:

And what's more, this theme is played over other scale-notes, descending ones in the cellos.

It's amazing how many different ways those few scale-notes can be made to sound by a genius like Sibelius. And the third movement, the scherzo, turns the same notes into a savage roar by jumbling them up just three of them and playing them as fast as possible. So it comes out like this:

Imagine: that wild sound is only another disguise of the original three scale-notes

only whirled up into a storm so that it sounds like this:

And so this one thread of clues we've been tracing goes through disguise after disguise, brooding, fierce, gentle, playful—until at last we reach the fourth movement, the final one, which is ushered in by a brave trumpet theme—made in the simplest way out of the original three notes, like this:

Now that sounds as though we're nearing our solution of the mystery—it's clear and affirmative; but not yet, we must still go through one more disguise—perhaps the most impressive one of the whole symphony, which is where the scale-notes turn into a mournfully haunting, folk-like tune in the minor:

and this little tune begins to repeat over and over, hypnotically, while underneath it the scale—the same scale—becomes a writhing figure, like a great serpent, also repeating over and over, like this:

and so on, and as it goes writhing on and that way, it gradually accumulates more and more power, more and more sound, until finally it develops the strength to burst out into the major, and the brave music is heard again, eventually leading to an ending that is almost overpowering in its brilliance. And so at last we have the solution to which all these scaly clues have been leading. And now, as you listen to the fourth movement, which we are about to play with its triumphant ending, you may find different meanings in this ending—the rejoicing after a storm, the joy of climbing a mountain and reaching the top, the joy of winning a game, or passing a tough exam, or being well after a sickness; but to the people of Finland this ending will always mean one thing only: freedom.

Watch a video excerpt of "A Tribute to Sibelius"

Consul General of Finland presents Bernstein with portrait of Jean Sibelius in recognition of an all-Sebelius Young People's Concert, during Sibelius centenary. February 9, 1965