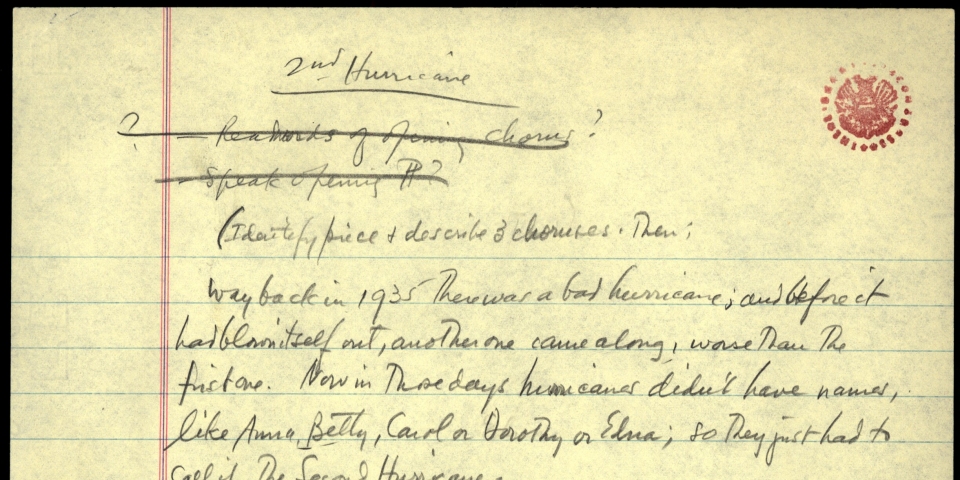 For today's program - the last one for this season - we are giving over the whole hour to one piece - an opera written by the great American composer Aaron Copland. But this opera, called The Second Hurricane, is different from most operas in two ways: first because the story is not only sung, but, spoken too -so it's partly a play and partly an opera. The second and most important difference is that it was written especially to be sung and played by young people of high-school ages and indeed, our entire cast today is made up of students from the High School of Music and Art here in New York. This also explains why our orchestra is somewhat smaller than usual: - it is the size of an average high-school orchestra; although it's still our good old Philharmonic, a little bit reduced.

That chorus over there is supposed to be grown-ups, the parents of this chorus here which is supposed to be high-school students. There are also a few really young people - grammar-school students, who sometimes have their own things to say. Now just to save time, we won't perform all the play parts; I'll sort of keep you posted on the story as we go along. Way back in 1935 there was a bad hurricane; and before it had blown itself out, another one came along, worse than the first one. Now in those days hurricanes didn't have names, like Anna, Betty, Carol or Dorothy or Edna; so they just had to call it The Second Hurricane.

Have you ever had an adventure - a real adventure, something big and terrible - and you were a hero? Veil these six high-school kids had a real adventure, and they were heroes too. When our story opens that first hurricane has just struck, bringing a flood with it, and lots of people have been stranded, without food or clothing or medicine. So other people from nearby towns that have escaped the flood volunteer to fly to the flood area, and bring food, and distribute the clothing, and take care of the sick. Now these six boys and girls have been chosen from their whole school to go and help: first of all, Gwen, because she was the first . to volunteer, and besides she has taken a nursing course. Then Butch, because he is the most popular and the president of his class; then Lowrie, because he has a radio - operator's license. He's a real book worm - you know, the serious type and loves to tinker with radios and things.

Then Fat, because he is so big and strong; actually he's not very fat - and nobody knows why he's called Fat - he's just always been called "Fat". And then Fat's best friend, Gyp, because he is - well - he's Fat's best friend - reason enough! And finally Queenie, because she is so pretty - and smart and popular. So here they are - 6 excited kids about to have a real adventure. Of course their parents are all plenty worried...

But the 6 kids go anyway, off to their adventure in an old-fashioned plane. For a while there is no news of them. Then suddenly there is news; a second hurricane is on its way; and still no word from the rescue plane!

Oh, it's terrible! What happen! All right, let's see what is happening. The rescue plane has developed engine trouble and has been forced to land, in the middle of nowhere. The pilot has gone on alone, to try to get the engine fixed, and our six heroes have been left with all the supplies on top of a little hill, which they name Two-Willow Hill. Why on a hill? Because they've had the report that a new hurricane may be coming, and a flood with it; so they'd better be on the highest ground they can find, away from the water, 'till the pilot gets back. So here they are - marooned on a hill top. This isn't any fun at all. FAT What do you call this. I thought we were going to do some rescuing, GWEN Nobody likes it any better than you do, Fat, so you may as well be quiet about it.
12 FAT But it's dumb to be left off here, just marooned. MUSIC UNDER LOVRIE (SPOKEN THROUGH MUSIC) Look at the river over there, how high it is on the other side of the levee - look at it rush, all brownish, Gee, it looks mean, GWEN You wouldn't think anybody could stand it, living here. Miles and miles of nothing. Miles and miles, and only the brown river, BUTCH There's not a house in sight, or even a shack, GWEN Suppose we have to stay here all night, QUEENIE I don't think that plane is ever coming back, I just feel lost. Lost forever. aac

Everybody's feeling pretty sour. And soon enough, like all sour people, they begin to squabble. FAT I bet there's some food in that box, Hey look, chocolate bars! GWEN You're not going to open that box, Fat? That's for the flood victims* You know what the pilot said, only in an emergency, BUTCH Cut it, Fat. FAT Well, isn't this an emergency? BUTCH Come on now, we've got to lug up the stuff, everybody, come on, Fat. FAT I'm too hungry, I'm just weak, what's the hurry anyway? LOWRIE (TO BUTCH) Say, first you'd better help me bring up the crate with the radio, that's the most important for us if we get into trouble. Come on, Butch. aac
15 BUTCH Look here, Lowrie, I'm the boss around here. If anybody gives any orders, it's me. You go down there, and I'll tell you what you're to carry up. GYP (IRONIC) You're a born organizer, aren't you? BUTCH Well, there's got to be some organization, hasn't there? Get a move on, Lowrie. LOWRIE This isn't the army, and you may as well find that out right away. BERNSTEIN And to make matters worse, a new face arrives - a little 8-year-old farm boy who got lost in the flood. His name is Jeff, and he's good and hungry. JEFF Yes, I'm mighty hungry, and I saw you taking a heap of things out of that airplane. BUTCH So that's what you're after. Well, you steer clear of it. It's not for you. GWEN It's not ours. We're taking it to some starving people in the flood area. aac
16 JEFF Yes ma'am, but I'm starving. GWEN Why wouldn't he want to eat? I do! JEFF Aren't you going to give me something? LOWRIE I'll set up the radio if somebody'11 help me lug it up. GYP Aw, shut up, Lowrie, what's the use of lugging it up here, and then down again? LOWRIE Well, the pilot said so. FAT Show off with your radio somewhere else, we're sick of your little act. GWEN This is the worst party I've ever been on, everybody crabbing. FAT Then cut it out yourself. JEFF Isn't anybody going to give me something to eat 'cause I'm starving? aac
17 #5 - CHORUS (HOW CHIIDISH THEY ARE) (WITH CUT) (5:45) SCORE P. 44
18 QUEENIE There ?s something funny in the air. Do you feel it too? Look at the sky over there. (THE SEVEN PRINCIPALS AS THEY WERE BEFORE THE LAST CHORUS BEGAN) LOWRIE There's a thunderstorm coming. If you'd only help me with my radio. (NO ANSWER) GWEN Well, I'm not going to do anything, unless everybody helps. (PAUSE) BERNSTEIN But nobody wants to help anybody. When people are scared they act tough, and try to be bossy. Nothing ever gets done that way, That's the trouble with our heroes of this moment; it's everyone for himself, instead of everyone cooperating, sticking together and doing something. So, with this big storm coming on, they get scared, and they get bossy; each one thinks he knows what's best to do - so they all separate. (MORE)
19 BERNSTEIN (CONT'D) Butch goes down the river to find the nearest town, and takes Jeff with him as a guide; Lowrie goes up the river; the two girls go by way of the road; Gyp takes another route just to be different; and Fat just stays there on Two-Willow Hill, because he's got a bellyache from eating too many chocolate bars. You see, he finally did get into that box. So they've all broken up; and at that very moment, the second hurricane strikes. bg
^ 20 #6 - FINALE ACT I (LIKE A GIANT BOMB) (1:00) SCORE PAGE 66
21 FIRST. COMMERCIAL (4:00) (DURING BREAK FOR COMMERCIAL ORCHESTRA WILL PLAY 45 SECOND INTRODUCTION TO ACT II WHICH WILL NOT BE FED TO AIR - FOR CARNEGIE HALL AUDIENCE ONLY)
SUPER SHOW TITLE 22 #7 INTRODUCTION TO ACT II (I:05) SCORE P. 68
23 BERNSTEIN The storm is over. The two willows have been blown down on Two-Willow Hill; there's nothing there but Fat, scared out of his wits, calling for his friends. And by some miracle, they all turn up, one by one, a bit damaged, scratched - nothing serious - and quite ashamed of themselves. Now, after the great danger, they realize how pigheaded they have been, and how much they would have suffered if any one of them had been hurt or lost or - killed. And so they begin to take care of one another; there's very little they can do to help their situation; but at least they're together - and that's a good feeling, all by itself.
GROWN-UPS CHORUS 24 #9 - (TWO WILLOW HILL) (WITH CUT) (4:00) SCORE p. 75
25 #9A — SEXTET (3:00) SCORE P. 85
26 #9B- JEFF'S SONG (:50) SCORE P. 93
#9-QUEENIE'S SONG (1:50) SCORE P. 95 27
28 BERNSTEIN Well that's more like it - everybody's feeling much better now, All friends again. But they still have to wait 'till the morning light comes so they can be rescued. Well, what would you do to pass the time if you were in their shoes? You'd sing, of course. So they all sing an old American Revolutionary song they learned at school - about the capture of General Burgoyne, The words are kind of old fashioned and stilted - and our heroes probably don't even know what they mean, I guess we've all learned songs in school which we sang with great energy without understanding the words. But this song about Burgoyne is cheerful at least - and will keep their spirits up until the night is over. And the main thing about this song is that it's one they all know together and singing it is the one thing they can all do together.
29 #9d - 6 PRINCIPALS (THE CAPTURE OF BURGOYNE) (3:00) SCORE P. 98
30 #10 - FINALE (3:00) SCORE P. 105
32 BERNSTEIN: (CLOSING- REMARKS) (COPY TO FOLLOW)