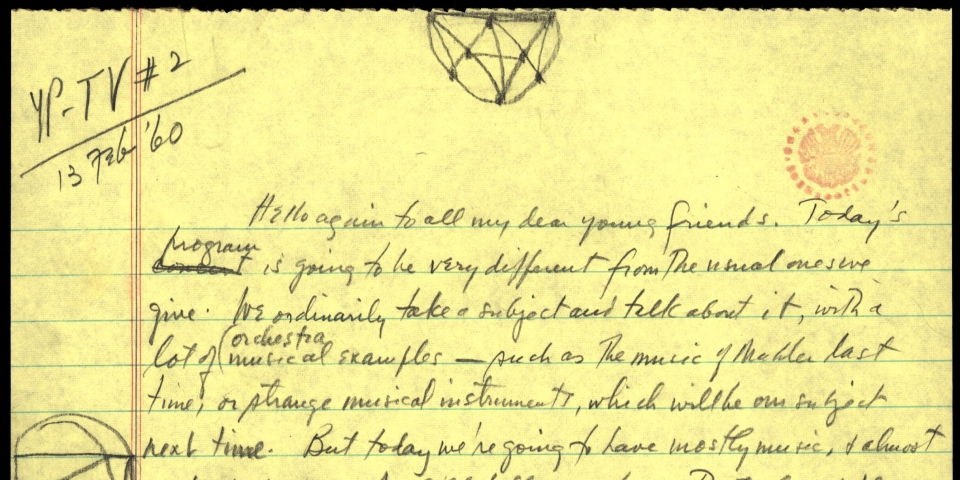 Young Performers No. 1 "Peter and the Wolf"

Hello again to all my dear young friends. Today's program is going to be very different from the ones we usually give. We ordinarily take a subject and talk about it, with a lot of musical examples by the orchestra - as for instance the music of Mahler which we did last time, or strange musical instruments, which will be out subject next time. But today we're going to have mostly music, and almost no talk at all. Which should please those of you who don't like being lectured to, and may disappoint others of you, I hope. But let me tell you why today's program is different.

As you must know, a conductor's life is not at all just a matter of getting up on this podium and conducting rehearsals and concerts - that's hard enough, but it's pie compared to all the other things he has to do, which I won't go into right now.

But one of these many other things he does is listen to performers who want to play or sing with his orchestra. And that brings me to the point of today's concert. Among all the hundreds of singers and pianist and violinists and cellists and kazoo players and every-thing else I've listened to for years, there are always some very gifted ones; and recently there has been a specially gifted crop of young ones, mostly in their teens. This I have found wonder-fully exciting; because with all the talk that goes on nowadays about teen-agers and their problems, about delinquents and gangs, it's marvelous to see how many teen-agers are serious, hard working people, who find great music exciting and fun.

Well, this collection of talented young performers began to grow so big that I wondered how I could give some of them a chance to perform with our orchestra. And then I had the idea of the perfect place for them to be presented - right here on our Young People's Concerts in Carnegie Hall, where they can be seen and heard by thousands of other young people, and by millions more on tele-vision.

Of course, we can't present all of them - there just isn't time. But I assure you that the few you will hear are among the cream of the crop.

Now just to make it a real festival of youth, we're going to hear some young conductor's too. You see, here at the Philharmonic, we don't have the usual assistant conductor, but instead we have several assistant conductors, who are young men chosen for their special talent. They change every year; and they come from all over the country, and even from other countries. Of course, they're not teenagers; but a young conductor has to be a little older than a young pianist or violinist: that's because conducting takes so many years of experience, and requires a certain authority. So even though they're already out of their teens, we can safely call them young conductors.

Here some our first youthful genius; he plays the cello, and in a way that I wish I could play the cello.

His name is Daniel Domb. (APPLAUSE)

He is 15 years old, and he comes from the land of Israel. He will play the first movement of Dvorak's Concerto in B Minor - a very difficult piece, indeed - but I've heard him play it, and I couldn't believe my ears, it was so beautiful and grown-up. The orchestra part which is also quite difficult, will be conducted by Kenneth Schermerhorn, one of our gifted young assistant conductors. He comes from Schenectady. As for me, I'm just going to sit down and enjoy the music, as I know you will to.

Now for our second team of young talents. This time our soloist is a violinist, by the name of Barry Finclair. (APPLAUSE) He is only 14, and comes from New York City, and well, he's marvelous. The orchestra this time will be directed by Stefan Mengelberg, who comes to us originally from Germany, but is now a full American citizen. Together, our two young men are going to play the brilliant final movement of the Wieniawski Concerto in D Minor. This is a sort of wild gypsy music, tamed by Wieniawski into a breathtaking concert piece. It's no easy trick to toss this one off at the age of 14; but I have no worries about Master Finclair. Here goes.

For this last piece we're going to play, you just have to pretend that I'm young too. As a matter of fact, it's not too long ago since I was fourteen - only 25 years or so. But there'll be plenty of youngness in this piece anyway. First of all, it's Prokofieff's famous musical story, Peter and the Wolf we're going to play which is pretty young music. It's about the young, and it's for the young. Besides, our narrator - the person who will tell you the story as we go along - is all of 9 years old. (That makes up for my age.) Miss Alexandra Wager is her name, and she is an actress who is fast becoming very well known. Here she is to tell us the story of Peter and the Wolf.

Now usually before this piece begins, the narrator is supposed to explain how each person or animal in the story is described by a certain instrument of the orchestra. But, I’m sure you know all that already, since you're all such musical experts by now. At least I hope you are. Well all right-- let’s try you out. What character is represented by these three French horns?

Right: The wolf. And what is this oboe describing?

Right again. The duck. And now the flute?

You’re batting a thousand. The bird. And who’s this low character in the clarinet?

Right -- the cat. Then, of course, there are these famous drum beats.

What’s that all about? Right -- the hunters shooting their guns. Now who is this lumbering old bassoon?

The grandfather. My, you really know this piece, don’t you? Well, that’s all of them - except wait: I left out the most important one of all - the strings.

And that is? ... Peter. I congratulate you on a perfect quiz! And now. Miss Wager, it's your show.

(ORCHESTRA AND NARRATOR: PROKOFIEFF PETER AND THE WOLF) (23:00)

Early one morning Peter opened the gate and went into the big green meadow. On the branch of a big tree sat a little bird, Peter's friend: “All is quiet” chirped the bird gaily. [Chirps]

Yes, all was quiet. Even the pond was still.

Suddenly something caught Peter’s attention. He noticed a cat sneaking through the grass. The cat thought, “The bird is busy arguing! I’ll just grab her.” She crept towards the bird on velvet paws. “Look out!” shouted Peter, and the bird, immediately flew up into the tree.

While the duck quacked angrily at the cat from the middle of the pond, the cat crawled around the tree and thought: "Is it worth climbing up so high? By the time I get there the bird will have flown away."

Then Grandfather came out. He was angry because Peter had gone out into the meadow: “It is a dangerous place,” he said. If a wolf came out of the forest, then what would you do?” But Peter paid no attention to his grandfather’s words because a boy like Peter aren’t afraid of wolves. So grandfather took Peter by the hand, led him home, and locked the gate.

No sooner had Peter gone, than a big grey wolf did come out of the forest. In a twinkling, the cat climbed up the tree. The duck quacked and in her excitement jumped out of the pond. But no matter how hard the duck tried to run, she couldn’t escape the wolf: He was getting nearer…nearer….catching up with her…And then he got her, and with one gulp, he swallowed her!

And now, the cat was sitting on one branch, the bird on another branch…not too close to the cat. And the wolf was walking around and around the tree looking at them with greedy eyes.

In the meantime, Peter, without the slightest fear, stood behind the closed gate watching all that was going on. He ran home, took a strong rope, and climbed up the high stone wall. One of the branches of the tree around which the wolf was walking, stretched out over the wall. Grabbing hold of the branch…Peter lightly climbed over on to the tree.

Meanwhile, Peter made a lasso and carefully letting it down...he caught the wolf by the tail and pulled with all his might. Feeling himself caught, the wolf began to jump wildly trying to get loose. But Peter tied the other end of the rope to the tree, and so the wolf’s jumping only made the rope around his tail tighter.

Just then the hunters came out of the woods, following the wolf’s trail, and shooting as they went. But Peter sitting in the tree said, “Don’t shoot! The bird and I have already caught the wolf! All you have to do is help us take him to the zoo!” And now….Imagine the triumphant procession, Peter at the head, after him the hunters leading the wolf; and winding up the procession: Grandfather and the cat.

Grandfather, tossed his head and said: “Well, and if Peter hadn’t caught the wolf? What then?” And above them flew the little bird chirping merrily, “My, what fine ones we are, Peter and I. Look what we have caught!”

And if you listen very carefully, you could still hear the duck quacking, very softly of course, inside the wolf’s belly, because the wolf in his hurry had swallowed her alive.

Watch a video excerpt of "Young Performers No. 1"