The GRAMMY Museum® presents Leonard Bernstein at 100 digital exhibit. GRAMMY Museum® announces next round of new and never-before-released free digital content while the GRAMMY Museum in Los Angeles is closed until further notice in light of COVID-19. The Museum's Public Programs digital series features new intimate sit-down interviews with artists and musicians recorded via Zoom, as well as archival Programs from its 200-seat Clive Davis Theater. Since the Museum opened 12 years ago, it has offered more than 900 Public Programs. The Museum is also releasing exhibit slideshows featuring items from past exhibitions. 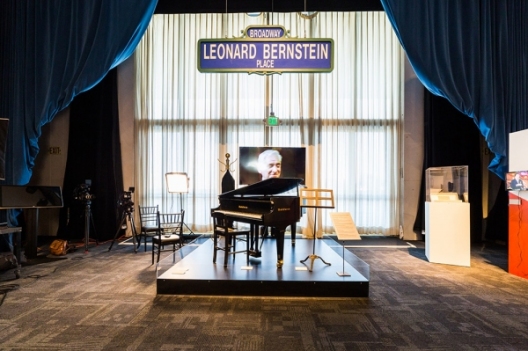 The Drawing from more than 150 photographs, personal items, papers, scores, correspondence, costumes, furniture, and films, Leonard Bernstein at 100 marks the official exhibit of the centennial and is the most comprehensive retrospective of Bernstein's life and career ever staged in a museum setting.
Items on display include:

In addition to the objects and the multi-media presentations, the exhibit includes a number of interactive displays, designed to allow the museum visitor deep access into Bernstein's creative mind and music legacy. A listening bar will enable visitors to explore some of Bernstein's most noted works; and a vocal booth gives visitors the chance to sing lead in "West Side Story". Another interactive breaks down the parts of a symphony for greater understanding of Bernstein's greatest orchestral works, while a specially designed interactive gives visitors the opportunity to step into Bernstein's conducting shoes and lead the New York Philharmonic. There are Bernstein home movies, GRAMMY performances, interviews with contemporaries and colleagues, clips of his most noted stage works, segments taken from Bernstein's famous Young People's Concerts, and performances with the New York Philharmonic.