by Garth Edwin Sunderland
(as printed in the Summer 2020 edition of Prelude, Fugue, & Riffs)

Much of my work with the Bernstein legacy has been on the later, lesser-known works, which reveal a composer fully in command of the vast possibilities that music offered to him, and able to synthesize them effortlessly through his own unique voice and enormous, iconic self. Dybbuk, a dark masterpiece for both its creators, serves Lost Dog's mission to shed light on repertoire that's been unjustly neglected or overlooked, and it's deeply rewarding to fulfill this mission even with a composer now as universally beloved as Leonard Bernstein. Working with Fancy Free has been an absolute delight - it's been incredibly rewarding to spend time with this exuberant, brash, and simply terrific score. It is the hope of the Leonard Bernstein Office that these new orchestrations will allow more ballet companies and chamber ensembles the opportunity to bring these works to new audiences around the world. 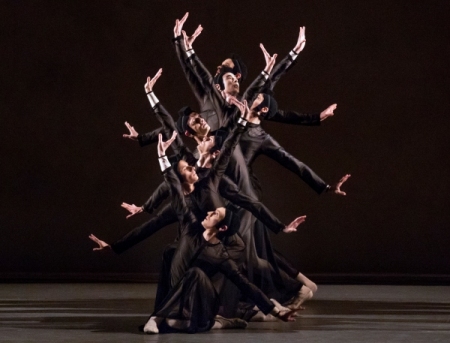 DYBBUK (1974)
Premiered by New York City Ballet in 1974, and conceived in collaboration with his long-time creative partner Jerome Robbins, the ballet is an abstraction, more than an adaptation, of the classic Yiddish drama by S. Ansky. The play tells the story of Channon and Leah - pledged to each other at birth, her father instead marries her to another, despite their true love. Channon is visited by "The Messenger", turns to the Kabbalah, and becomes a Dybbuk, a vengeful spirit. He possesses Leah, is exorcised, and the two lovers are finally united in death, and oblivion.

The Bernstein/Robbins work is not, however, a story ballet. Though its overall shape follows the play, it is a series of tableaux-in-movement inspired by dramatic moments from the Ansky source. Bernstein later wrote, looking back on the work:
"...Ansky's Dybbuk is really a drama about dualisms - Good and Evil. Ends and Means. Male and Female. Justice and Necessity. Self and Society, etc., with all their problematic intercombinations, and especially the duality of the so-called True World as opposed to this world in which we seem to reside. In Ansky's sense, 'this world' is really limited to the tiny but teeming area of the Russian-Polish ghetto; the True World is the world of angels, the ten spheres, the sources of Being." 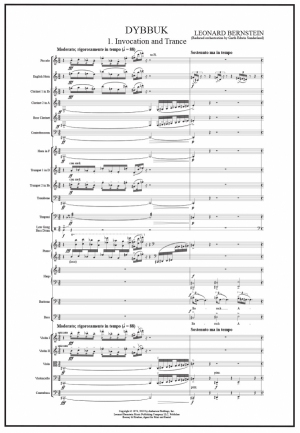 For both Robbins and Bernstein, the work was a pathway to exploring their Jewish identity. But for Bernstein, it was also a chance to show what he could do. At the time, the hegemony of serialism in American concert music formed its own oppressive community, and the broad popularity of Bernstein's music was often greeted with a sneer from the establishment. The material of Dybbuk is created from three sources - an octatonic scale, used for music representing "This World", and infused with Bernstein's Jewish/Ukranian heritage; three tone rows, used for the music representing the "True World"; and Kabbalistic numerology, which deeply informed the technical construction of the entire score. Bernstein's incredible skill at synthesizing vastly different styles of music from the entire spectrum of human expression is on bold display. Nevertheless, the score was dismissed by a New York Times critic for its 'prevailing tonal...conservative' tone.

Dybbuk is music unlike anything in Bernstein's catalogue. Over the course of the score it becomes increasingly wild and savage, culminating in the terrifying "Exorcism", which features a dazzling 7/8 cannon in which the voices enter on different, disruptive off-beats, and building to a terrifying, apocalyptic climax. The score contains moments of great beauty as well, in particular the searingly passionate pas-de-deux between Leah and the demon who possesses her. 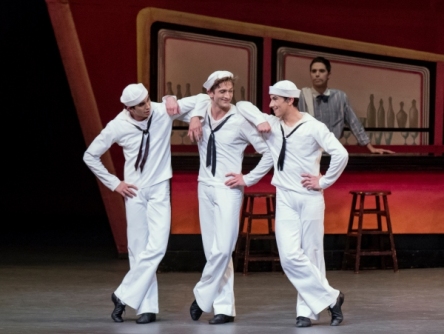 FANCY FREE (1944)
The Times' preview of the premiere of Dyybuk was headlines "The Dybbuk is not Fancy Free." True enough. If Dybbuk is the music you would least expect from Bernstein, Fancy Freeis *exactly* what you would expect from him!

Following closely on the heels of his breakthrough success with the Symphony No. 1: Jeremiah, Fancy Free was a huge hit at its 1944 premiere at American Ballet Theater. Here were two of the most promising young American artists of their disciplines - both Bernstein and Robbins were just 25 at the time - bringing elements of popular dance and jazz into the hallowed halls of ballet. There's a terrific energy to the work, a thrilling sense of "we're gonna show you what we can do!" The tremendous reaction to the ballet led to the whirlwind creation of the hit Broadway musical On the Town, which premiered just 8 months later.

The ballet follows three sailors on leave in New York City, on the prowl for adventure, and (of course) girls. While the surface of the music is bright, snappy, and joyful, the score is also tremendously sophisticated. Dissonance abounds, and the rhythmic vibrancy is the result of precocious craftsmanship. The music is often hierarchical, with different musical concepts superimposed (the opening and closing movements employing a bass line in 3/2 under a melody in 4/4), or simply playful, as in the drunken, multi-metric waltz that keeps stubbornly stumbling away from 3/4. 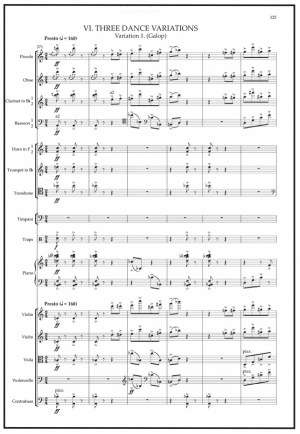 History has come round on Bernstein - the global celebration of his Centennial has shown the depth of feeling for both the man and his music. His talent was extraordinary, his reach as a communicator and composer unparalleled. It is my hope that these new sinfonietta orchestrations will allow more organizations to perform Dybbuk, and allow it at last become recognized as an integral part of the most important legacy in American music; and to allow Fancy Free to bring smiles to even more faces, as one of Bernstein's most popular and dazzling iconic works.

Garth Edwin Sunderland is Vice President for Creative Projects for The Leonard Bernstein Office. He is also a composer, performer, and interdisciplinary artist, and artistic director of the Lost Dog New Music Ensemble.