From the Archives: MASS Turns 40

From the Archives: MASS Turns 40
by Michael Hume
(as printed in the Fall/Winter 2011-12 issue of Prelude, Fugue & Riffs 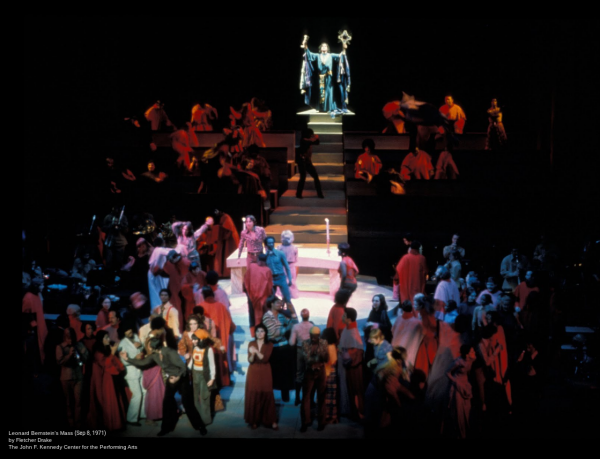 My history with MASS began as a nineteen-year-old student at Georgetown University in Washington, D.C. I had been studying voice for about a year and singing in the Glee Club and Chorus at school. In early summer, I was invited to audition for the Choir of MASS, the new work by Leonard Bernstein that would open the Kennedy Center. Norman Scribner, the director of Washington’s Choral Arts Society, would prepare the chorus of local singers for the production. Happily, I was selected as one of the tenors.

We worked intensively in July and August to prepare the music of the Choir, some of the most intricate in the score. As rehearsals progressed, we understood more about our role in this new theatre piece: the Choir, singing primarily in Latin, would support the actions and intentions of the spiritual leader, known as the Celebrant. With each passing rehearsal, we realized that we were involved in something truly extraordinary, something the likes of which had not been seen before.

In late August, only a couple of weeks before the opening night, we were rehearsing in a choir room at the National Cathedral, when Bernstein walked in. I estimate that he listened for about five minutes or less before taking over the rehearsal and leading us through the music himself. You could sense that Bernstein wanted to work with us personally, to talk about the music, to add his own energy to our progress and understanding. It wasn’t ego. It was, as I would observe many times in the future, an act of sharing, of collaboration, of education, and of love for music, whether it was his or someone else’s. This was the first time I had seen Bernstein in person and here I was, rehearsing his music, under his direction, for the most important musical happening in the nation’s capital since Marian Anderson sang on the steps of the Lincoln Memorial.

The opening of the Kennedy Center, with its Opera House, Concert Hall and Eisenhower Theatre, would, indeed, reshape the artistic identity of Washington forever.

About two weeks before the opening of MASS, we were ushered onto the stage of the Opera House, with its distinctive, lush, red upholstered seats and walls, illuminated by spectacular star-burst chandeliers. We began to put the whole show “on its feet,” under the direction of the wonderfully patient director, Gordon Davidson. We were introduced to the other one hundred and forty or so participants in the production. We heard, for the first time, the brilliant music written for the Celebrant, the Street People, the Boys Choir, the marching band, rock band and blues band, and the pit orchestra of strings and percussion, led by the first conductor of the work, Maurice Peress. We watched the superb artists of the Alvin Ailey Company interpret the dance music that Bernstein wove into the dramatic fabric of the piece. To this day, I can picture Judith Jamison, Ailey’s star dancer, dominating the stage with her presence and grace. Each of the Broadway performers, cast in the collective role of the Street Chorus (or congregation), delivered electrifying renditions of their individual songs.

And then there was Alan Titus, the first Celebrant. It was the perfect role fitted to the perfect performer. Bernstein had rarely written a more demanding part.

It requires a particular kind of lyric baritone voice, almost a tenor, who can sing with power but not sound “operatic,” deliver high notes full voice but also in a floating pianissimo, and deliver each and every syllable with effortless clarity. Dramatically, it is equally challenging. The Celebrant starts as an innocent, simple man performing a ritual with the best of intentions, and ends as a broken, shattered spirit whose very sanity is in doubt. I have heard many Celebrants over the years, but I have yet to see or hear someone who combines the vocal and dramatic qualities that Alan Titus brought to this incredible role.

Of that historic opening night, I cannot claim to remember every detail. I remember that it was a magical, high-energy performance, and that the audience sat in awed silence at the end, as if afraid to break the spell created by the embrace of peace (“Pax Tecum”) passed from the stage to all those seated in the house. The clearest memory of that evening is the part that was not staged or rehearsed in advance: Bernstein himself, coming onto the stage as the audience went wild, embracing cast members right and left until finally reaching center stage and joining arms with the cast as the lights came down for the last time.

I was supremely blessed to go on to play the role of the Celebrant over sixty times in my career as a singer, throughout the United States and in the European premiere in Vienna with the Yale University production conducted by John Mauceri and broadcast on PBS Television in the mid-1970s. I “came home” to Washington for the 10th anniversary production in 1981, alternating in the role with Joseph Kolinski. Every performance of MASS was a unique opportunity to share Lenny’s vision of community and communion, of faith, and the hard work of finding that small voice deep inside that can sing, with renewed simplicity, “lauda, lauda, laude.”

Michael Hume is currently the Director of the Music Department at Adelphi University in Garden City, NY. His father, Paul Hume, was the music critic of the Washington Post for thirtysix years. Paul Hume's opinion of MASS as one of Leonard Bernstein’s most beautiful and important works has been shared by many other critics, and thousands of fans, over the past forty years.