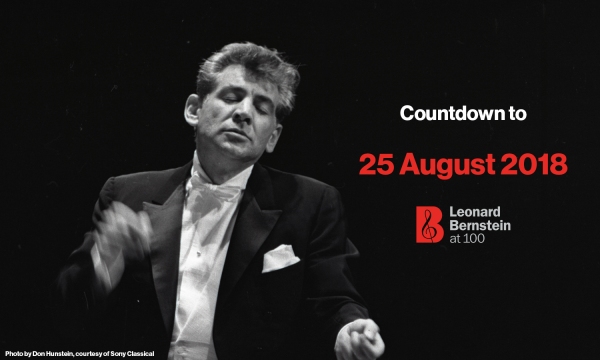 International summer festivals focus on Leonard Bernstein in his centennial year, with a series of prestigious events around the birthday itself on 25 August, including the Tanglewood Festival and the BBC Proms.

This summer accelerates the festivities for the Leonard Bernstein centennial, with the birthday itself celebrated on 25 August. American events are led by the Tanglewood Festival, which had such a close relationship with the composer and conductor across half a century, from the time he attended the inaugural 1940 class as a protégé of Serge Koussevitzky to his final concerts in 1990 with the Boston Symphony Orchestra and Tanglewood Music Center Orchestra.

The birthday celebration sees a host of conducting talent sharing the Tanglewood podium including Andris Nelsons, Christoph Eschenbach, Keith Lockhart, Michael Tilson Thomas and John Williams, with performers including Audra McDonald, Midori, Yo-Yo Ma, Susan Graham and Thomas Hampson. In addition the Boston Symphony Orchestra will be augmented by players from numerous orchestras around the world with which Bernstein maintained close associations.

In Europe, Bernstein is the most performed composer at the BBC Proms with eight major works including On the Town with the London Symphony Orchestra conducted by John Wilson on the birthday itself. Other highlights include two concert performances of West Side Story with the John Wilson Orchestra, Antonio Pappano conducting Symphony No.1: Jeremiah with the Santa Cecilia Orchestra and Marin Alsop conducting Symphony No.2: The Age of Anxiety with the Baltimore Symphony and pianist Jean-Yves Thibaudet.

Other summer festivals with Bernstein highlights include those most closely associated with the maestro. The Schleswig-Holstein Music Festival presents The Big Bernstein concert and a recreation of Bernstein’s momentous 1989 performance of Beethoven’s Ninth Symphony following the fall of the Berlin wall. The Pacific Music Festival celebrates the centennial of its founder in July with an all-Bernstein programme and Halil conducted by Valery Gergiev in Sapporo, Hiroshima and Tokyo. Ravinia and the Chicago Symphony Orchestra with Marin Alsop celebrate the centennial with a full production MASS and a concert featuring Symphony No. 1 "Jeremiah".

August 25th is also a celebration day at the Grafenegg Festival in Austria, with a Bernstein Hommage concert featuring the Tonkünstler Orchestra conducted by Yutaka Sado providing a survey of the composer’s oeuvre. Australia’s birthday tribute is provided by the Queensland Symphony Orchestra in Brisbane with an all-Bernstein programme conducted by Alondra de la Parra. The New York Philharmonic travels to the Bravo! Vail Music Festival for a pair of concerts celebrating Bernstein's contributions to the Broadway stage. Wolf Trap presents a grand celebration, including performances by George Takei, Misty Copeland, and Paquito D'Rivera, among others. The London and Baltimore Symphony Orchestras will visit the Edinburgh International Festival with performances of Bernstein works.

Please visit our calendar for a complete listing of centennial events.

Explore The Bernstein Experience on Classical.org, official digital partner of Bernstein at 100.