From the Archives: Behind the Scenes: The YOUNG PEOPLE'S CONCERTS in the Making 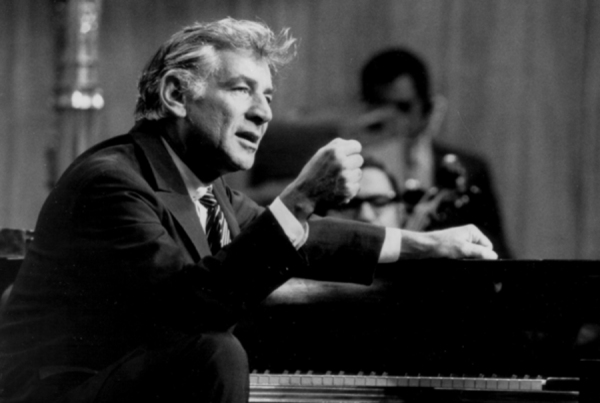 With all the renewed interest in Leonard Bernstein's YOUNG PEOPLE'S CONCERTS, now available on videotape, you may wonder how a Young People's Concert was originally made for prime-time television. The formula was a relatively simple one. First, assemble more than a million dollars' worth of mobile television equipment. Next, combine 75 highly trained programming and engineering specialists and place everyone and everything in and around a concert hall at Lincoln Center. Add a famous conductor-narrator in the person of Leonard Bernstein, 106 symphony musicians and then record for one hour.

The production involved the use of six television cameras ( eight were used on occasion, twice as many as on most major studio broadcasts). Two mobile cameras were on stage, two were placed in the audience, one was located in the hall's film projection booth, and the remaining one was hidden behind the orchestra, directly stage center, from where it projected its lens through a specially cut "porthole" for head-shots of Bernstein.

For the audio part of each concert, there were some 23 microphones overhead and on stage, in addition to the special mike worn by Bernstein (pinned to his necktie) for his explanation of the music under discussion.

Prior to this, the lighting director had designed and installed the illumination required for the show, since it was obviously very important that the orchestra members not be blinded by glare. In addition to the full light on the stage, the lighting director also had to provide four or five lighted areas in the auditorium for the audience reaction shots that were taken throughout every program.

Each of the broadcasts had two stage managers: one to maintain general order on stage, and the other for cards, pictures or any other graphics used on the broadcast. Both gave instructions to the stagehands operating the equipment.

Unlike most studio or remote programs, the YOUNG PEOPLE'S CONCERTS series had two control rooms - one for audio and the other for video. The audio control room was located above the stage on the right-hand side of the hall, the video in a sub basement two floors below the stage level. In the street alongside the 65 th Street stage entrance, now named Leonard Bernstein Place, sat a huge mobile truck feed for the generators and other technical gear involved in the broadcast.

In the sub-basement, imagine 22 TV sets in a space about the size of your living room; this is what the video control room looked like. As director, I was flanked by one associate and one technical director. The three of us sat at a long table facing a bank of 12 monitors and equipped with microphones and control buttons. When I selected the camera angles, framing, order and pace of the shots, the associate director relayed this to the camera personnel and set up the pictures requested. The technical director pushed the button that put the prescribed picture on the air when it was wanted.

Seated behind us were a production assistant, Candy Finkler, my assistants, Mary Rodgers and John Corigliano, Jr., and a secretary, Liz Hoover. Candy was primarily concerned with clocking the exact time elapsed on each portion of the script and music. Mary followed the script and the prompting device, while John followed the musical score.

Sandy Bell, the engineer-incharge, supervised the installation of all electronic equipment. The intricacies of broadcasting the later concerts in color, at that time technically demanding, made this responsibility far greater and more complex than when the concerts were first broadcast in black-andwhite.

In a darkened part of the video control room, additional engineers kept watch on another bank of 10 monitors to be sure the electronic scope sent out the optimum signals for transmission.

The audio engineer Larry Schneider handled the placement of microphones, setting levels and "riding" the controls that picked up the overall sound of the entire orchestra, the individual sections or soloists, the audience response and, of course, Bernstein's voice.

Seated next to him was the music coordinator, Tom Shepard, who was a musically trained specialist in recording and sound balancing. Tom approached his job with the ears of an artist, which complemented Larry's "technical ear" in obtaining the proper balance for this large orchestra.

The total number of production, technical and special personnel needed to get a YOUNG PEOPLE'S CONCERT on videotape amounted to 75. Add to this the conductor and orchestra, plus the New York Philharmonic staff, and around 220 people in all were involved in putting a 'simple' music program on the television screen.

Roger Englander was the Producer/Director of the YOUNG PEOPLE'S CONCERTS on CBS-TV.