From the Archives: Writing the Life of Leonard Bernstein

Writing the Life of Leonard Bernstein
By Humphrey Burton

as printed in the 1994 Spring/Summer issue of Prelude, Fugue & Riffs 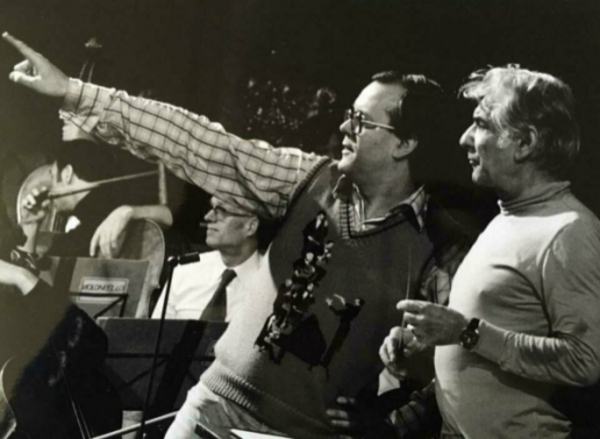 Finishing my biography of Leonard Bernstein proved even more difficult than starting it. After nearly three years, I had grown accustomed to my place - the 32nd floor of a tower block opposite Lincoln Center - and to my monk-like routine of research and writing, interspersed with tennis games with my archivist colleague Karen Bernstein, and five-mile jogs around Central Park under the auspices of the New York Road Runners Club. What a lifeline Central Park proved to be!

When I began work on this biography, in the spring of 1991, I thought naively that I'd have the whole thing done in 18 months. I planned to carry out the primary research and interviews and then to settle down to write at home in England. Quite soon, however, I recognized that unless I got to work on the book immediately, I would have forgotten the beginning of the story before I had reached the end. Basically, I am a television man, accustomed to . relatively short bursts of high intensity. A complete change of approach was necessary, so my wife Christina and I furnished an apartment and settled in New York. In September 1991 I composed my first sentence: "He was almost born on the kitchen floor ... " It was a great relief to be on my way.

I wrote in longhand, covering approximately 6,000 note-book pages. Kelly Briney, my faithful typist, turned these much-amended scribbles into nearly 2,000 pages of typescript. After further revisions and some savage (but essential) editing, the manuscript was boiled down to less than half that size. It's still solid but just light enough to read in bed.

I proceeded simultaneously on two fronts, researching only a few years ahead of my narrative. And I can't tell you how exciting it was to put anecdotal flesh and blood on the outline structure of LB's life. His letters in particular were a revelation. I was grateful when Shirley Bernstein allowed me to see the very touching letters she had received in 1950 from her brother, in which LB declared his determination to marry Felicia Montea legre. My heartfelt thanks also to Jamie Bernstein Thomas, LB's elder daughter, who made available her mother's correspondence. Especially important are letters written before they were married - in 1951 it was Felicia who was urging LB to make up his mind! Also valuable for Broadway historians are the letters they exchanged during the out-of-town run of WEST SIDE STORY in 1957, when Felicia was in Chile.

Stories about LB, concert programs and private recordings were still being forwarded to me long after Doubleday's copy editor had cried "Basta!" Indeed, I should like to thank every one of you, several hundred in all, who responded to my request for Bernsteiniana issued in prelude, fugue & riffs back in 1992. Much - too much - had to be put aside for another time. Incidentally, my next endeavor in this field has the working title LB and Friends: Selected Correspondence. So please look through your caches of letters from Mr. Bernstein and if at all possible, send me a copy in care of The Leonard Bernstein Society.

Meanwhile, I shall greatly miss the unique proximity to LB that I have enjoyed these past three years. I've experienced so many aspects of his life as I've listened to his music and pored over the letters, date-books and press clippings collected over half a century. All I can do now is wait for publication and critical response. Errors will be detected, I'm sure, but I doubt whether anybody will persuade me I should have written a different kind of book. For example, early on, I became convinced that there was no substitute for a chronological narrative, and I was equally certain that LB's compositions were an integral part of his life and had to be discussed as the tale unfolded rather than being confined to separate discussion elsewhere. I hope you'll approve. And in closing may I say that I'm not unduly proud: I'll be happy to receive comments, criticisms and corrections from any reader of pf&r, for consideration in what I hope will be the Second Edition.