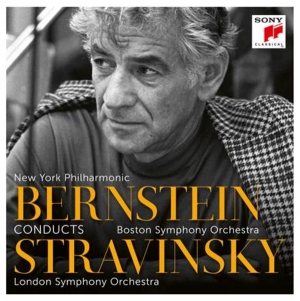 Bernstein's Stravinsky
“The last great father-figure of Western music” was how Leonard Bernstein eulogized Igor Stravinsky in 1972 before his homage concert in London a year after the composer’s death. Stravinsky’s works, he asserted, “sum up and embrace all of music itself – from primitive folk art to highly sophisticated serialism, from rarefied church music to outspoken jazz.”

In fact, Bernstein performed surprisingly few selections from Stravinsky’s vast output, recording most of those for Columbia Masterworks and RCA Victor, yet they include some of his most indelible interpretations. And he also delivered eloquent and revelatory lectures on the composer. Sony Classical is now pleased to collect these performances and talks in a new 8-CD box set.

One of Bernstein’s earliest passions was Histoire du Soldat (The Soldier’s Tale). He studied the droll score at Tanglewood with his mentor, Serge Koussevitzky, first performing it in 1940 at a Koussevitzky family picnic. Then in 1947, after conducting it again at Tanglewood with Boston Symphony players, he recorded it, along with the enchanting Octet, on 78s for RCA. 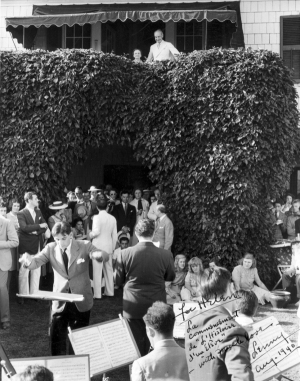 His most celebrated Stravinsky recording came a decade later, Le Sacre du printemps with the New York Philharmonic in 1958, and it elicited the composer’s famous reaction: “Wow!” When Bernstein conducted the Sacre in the USSR the following year – with nine Moscow Symphony Orchestra players augmenting the Philharmonic – the stunned Russian audience exploded in wild cheers. The New York studio recording, wrote Classics Today just a few years ago, still has “an excitement, spontaneity, and primal fury that no other version quite matches. It fully deserves its legendary status. The remastering has been excellently done … This has to be one of the most detailed and realistically engineered performances available.”

From around the same time comes Bernstein’s “compelling and viscerally exciting” (ClassicsToday) New York Philharmonic recording of the Firebird Suite (1919 version): “a must-have” (MusicWeb International). In 1962 there followed recordings of the seldom-heard Concerto for Piano and Wind Instruments (with soloist Seymour Lipkin), which Bernstein had performed in Moscow on that visit with the Philharmonic, and the suite from Pulcinella (“A very enjoyable rendition by any standard … It’s good to be reminded of how much sheer fun all of this music really is, and how much warmth of feeling it contains” – ClassicsToday).

After that he didn’t return to the studio with Stravinsky’s music until 1970, but it was worth the wait. As ClassicsToday’s reviewer wrote not long ago: “As time goes on, Leonard Bernstein’s New York recording of Petrushka only gains in stature … There are two ways to perform this music: as a brilliant but somewhat abstract orchestral showpiece, and as a vivid theatrical experience. The former predominates today, but as his typically enjoyable lecture-demonstration included with the recording makes clear, Bernstein opts for the latter, and projects it as few have. And so the fair music explodes with earthy vitality, Petrushka himself comes across as touchingly pathetic, the Moor as truly angry and nasty, and the conclusion genuinely spooky. All of this is contained within an interpretation that catches the score’s rhythmic punch as few have before or since, thanks to the virtuoso response of the New York Philharmonic. Really, if you are going to do the work complete, then this is the way to go.” 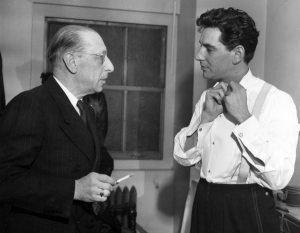 Two years later, this time with the London Symphony Orchestra, Bernstein revisited Le Sacre du printemps. “This later version, wrote ClassicsToday in comparing it with the New York recording, “has similar dynamism and energy”. And in the same London Symphony sessions, joined by the English Bach Festival Chorus, he recorded the Symphony of Psalms. Gramophone’s reviewer wrote: “He never softens the pungency or the rhythmic attack of the music. His chorus, bigger and more accomplished than Stravinsky’s, has the sort of ‘straightness’ of tone that the composer was obviously aiming for, and the recording is excellent.”

That autumn, Bernstein took up residence at his alma mater, Harvard University, as Charles Eliot Norton Professor of Poetry for the academic year 1972–73. He regarded this appointment as the greatest academic honour ever bestowed upon him: “Everything I do is in one way or another teaching,” he told an interviewer. His duties included delivering a prestigious series of lectures, which he crowned with a two-hour discussion of Stravinsky and his central position in modern music.

The heart of that memorable last Harvard appearance, entitled “The Poetry of Earth”, was an “outstanding” (ClassicsToday) performance of the opera-oratorio Oedipus Rex, recorded earlier at Symphony Hall with Bernstein conducting the Boston Symphony Orchestra and Harvard Glee Club, and featuring René Kollo as Oedipus, Tatiana Troyanos as Jocasta, and Tom Krause as Creon. When it was first released on LP in 1976, Gramophone’s Stravinsky specialist wrote: “It is amazing what dramatic truth emerges from the score if only the details of vocal writing, instrumentation, dynamics, are observed accurately and with feeling for their meaning. That happens, I think, almost throughout Bernstein’s new recording, which has the strongest cast of soloists that I can remember hearing in the work.”

This shattering performance of Stravinsky’s massive work, which conveys the same undiluted savage intensity as Bernstein’s Sacre, is aptly presented in Sony’s new edition within the original context of his “Poetry of Earth” lecture. Like every item in this indispensable new edition of Bernstein’s Stravinsky – also containing the conductor’s spoken introduction to Petrushka from 1970 – it is offered in the newest remastering from analogue tape. 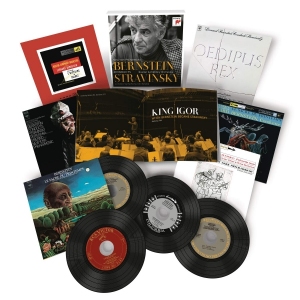 Photos:
Bernstein conducts Stravinsky's L'histoire du Soldat at an informal Tanglewood tea party. Serge Koussevitzky - conductor and Bernstein mentor - and his wife Natalie look down from the balcony. The inscription to Helen Coates refers humorously to L'histoire d'un éléve - the tale of the student. 1940, courtesy of the Library of Congress Music Division.