Pianist Pete Malinverni pays tribute to Leonard Bernstein with his all-star trio featuring bassist Ugonna Okegwo and drummer Jeff Hamilton. The album was selected as one of Jazziz Magazine’s Ten Albums You Need to Know (January 2022).

On the Town – Pete Malinverni Plays Leonard Bernstein, due out January 14, 2022, via Planet Arts Recordings, harkens back to an inspiring “only in New York” meeting between the two passionate musicians. 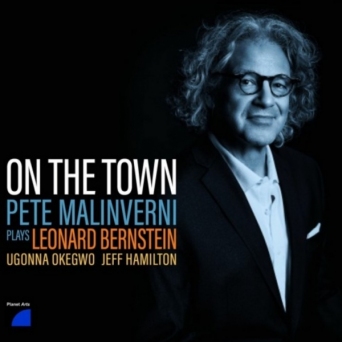 Having spent four decades on the New York City jazz scene, pianist Pete Malinverni has crossed paths with countless revered artists and come away with a host of tales to tell. But few moments measure up to the time that Malinverni met the iconic composer/conductor Leonard Bernstein.

The seeds planted in that meeting decades ago come to fruition on Malinverni’s stunning new album, On the Town – Pete Malinverni Plays Leonard Bernstein. Due out January 14, 2022 via Planet Arts Recordings, the album reimagines nine Bernstein favorites, along with a new Malinverni original penned in tribute to the composer, for an all-star trio featuring bassist Ugonna Okegwo and drummer Jeff Hamilton.

At the time of that fateful meeting, Malinverni had a steady gig at an upscale restaurant in the city. One night the swanky nightspot was chosen as the site of the opening night cast party for Franco Zeffirelli’s production of “Tosca” at the Metropolitan Opera. As Malinverni played through a selection of arias at the piano, Bernstein walked in, and the young pianist immediately launched into the composer’s “Lucky To Be Me.” Bernstein recognized the homage and, following a trip detour to the men’s room (where a friend of Malinverni’s broke the protocols of polite society and touted the pianist’s virtues), proceeded to spend a considerable portion of the evening hanging around the piano.

“Real musicians want to hang out with the band,” Malinverni says, recalling those magical hours.

“Bernstein was this gray eminence I’d see on TV, and I’d listened to his ‘Young People’s Concerts’ in high school. So he was a definite presence in my life even though I’d never met him.”

Malinverni still recalls that encounter – which included introductions to other notables at the party, including legendary songwriters Betty Comden and Adolph Green – as “one of the great moments of my musical life.” To this day he remains touched by Bernstein’s magnetic attraction to musicians of any stature.

“His public image was of a guy who knew his stuff and was super passionate about it. But I found out that night that as passionate as he seemed, he was even more so. When I saw him in the flesh, it was electric. His head poked through the clouds, and the piano somehow seemed a more exalted place then and thereafter.”