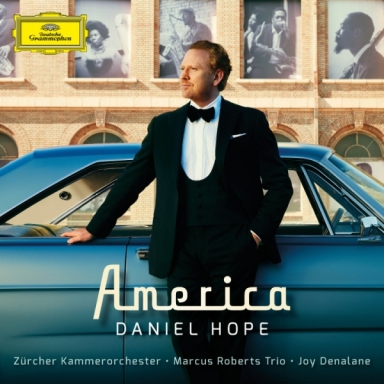 Berlin-based violinist Daniel Hope’s latest album takes a deep dive into the rich repertoire of American music, exploring its roots and distinctive qualities. “We know a piece is from America the moment we hear it,” says Hope. “But what makes music sound American?” America provides some answers, presenting works by composers as diverse as Leonard Bernstein, Sam Cooke, Aaron Copland, George Gershwin and Florence Price in outstanding new classical and jazz arrangements by Paul Bateman for solo violin in different combinations, with vocals, piano, jazz trio, string/chamber orchestra and percussion. The album was released on 4 February 2022 and is available now!

Noting the way Dvořák stimulated an ongoing political debate more than a century ago, when he cited African American melodies as a source of inspiration, Hope has chosen here to include works by Florence Price, Duke Ellington and Sam Cooke, all of whom made their voices heard in an age of racial segregation and social injustice. As well as jazz, blues and classical music, the wide-ranging tracklist of Daniel Hope – America also features Broadway hits, American folk music and the songs that generations of migrants and refugees brought with them to the New World. Together these pieces help reveal the way American music gained its own unique sound.

The album opens with a Gershwin Song Suite, which includes such classics as “Fascinating Rhythm”, “I Got Rhythm” and, from the pioneering opera Porgy and Bess, “Summertime”. Sam Cooke’s “A Change Is Gonna Come” (1964) recalls the singer-songwriter’s role in the Civil Rights movement, while Florence Price’s hauntingly beautiful Adoration shows why it was she who broke through barriers of race and gender to become the first African American woman to have her music performed by a major U.S. symphony orchestra. Other highlights of Hope’s new release include “Come Sunday” from Duke Ellington’s jazz suite Black, Brown and Beige, written for his band’s Carnegie Hall debut in 1943; the “Hoe-Down” from Copland’s ballet Rodeo, which celebrates the American West; and a suite of pieces by the German-Jewish composer Kurt Weill, who found refuge in America from Nazi persecution. Daniel Hope dedicates the album to his great-aunt, who, like Weill, escaped persecution in Germany and settled for the rest of her life in the United States. Four decades later, Hope’s father, a writer, liberal publisher and opponent of the apartheid regime, fled South Africa for London.