An Old Hall Made New

An Old Hall Made New
By Jamie Bernstein

I was ten when my father and the New York Philharmonic moved from Carnegie Hall to their brand-new home in Lincoln Center. I was too young to attend the subscription concerts, but I caught all the Saturday afternoon Young People’s Concerts. Quite apart from the musical goings-on, the hall was the perfect place in which to run around with my brother during rehearsals, blissfully unsupervised. During the interminable post-concert wait while my father autographed every single kid’s program booklet, the airy, sun-drenched corridors were ideal for playing horse with my friend Cynthia.

As a teenager, I began attending the grownups’ concerts, discovering the joys of Mahler, Tchaikovsky, and all the rest. I spent a lot of time in Philharmonic Hall over the years, always entering the building with my dad, either through the parking garage or the stage door. I knew that building inside and out, I thought – but on the rare occasion when I came in through the front entrance, I would get completely lost.

Decades later, in the late 1990’s, I found myself once again spending a lot of time in what was at that point called Avery Fisher Hall. But now I was the one working there, hosting the Philharmonic’s live national radio broadcasts. It brought a smile to my face, every time I crossed the street from the subway, to see the sign on the recently re-named corner: Leonard Bernstein Place.

So, what with one thing and another, I was very excited about this latest renovation of what is now called David Geffen Hall. The unanticipated Covid hiatus helped the work proceed more quickly – while also whetting audience appetites for live music. I myself felt positively starved for that experience.

What would the new hall look like? And maybe even more important: what would it sound like? Would the hall’s long-standing acoustical problems finally be fixed? That was certainly the goal of the whole enterprise.

A “hard hat tour” of the hall back in July was thrillingly fascinating – but golly, they sure had a long way to go. The place was a thrumming hive of construction workers, plaster dust, heavy equipment, and exposed wiring. Would the hall really be ready by the fall? My dear pal Deborah Borda, the orchestra’s president, promised that it would be.

And Deborah was right (as usual). On a crisp October evening, I attended the Philharmonic’s “First Hearing” performance. It was dreamlike: walking into a well-known space, now deeply transformed. The corridors felt warm and welcoming; the walls with their rose-petals-falling-through-dark-blue motif looked both exuberant and elegant. Inside the Wu Tsai auditorium at last, I breathed in the lovely newness: the walls of gently rippled wood, the “firefly” lights over the stage. The seats behind the stage, ooohh! 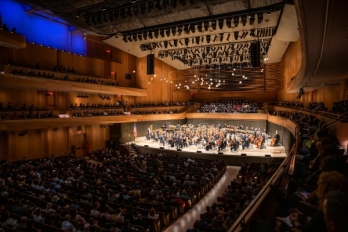 Photo by Chris Lee. Courtesy of the New York Philharmonic.

The program of audience favorites was designed to help us concentrate on the sound of the hall, rather than on the pieces themselves. From my seat halfway back on the left, the music sounded… fantastic. Bright yet resonant, every instrument audible, with the individual details blending into a pleasing balance. The brass in Copland’s “Fanfare for the Common Man” were blazing and fierce; the strings in Mozart’s “Eine Kleine Nachtmusik” were gentle and flowing. Good acoustics, indeed – matching the excellence of the Philharmonic itself, sensitively led by Jaap van Zweden.

Halfway through the performance, Deborah Borda invited the audience to switch seats, so as to experience the hall’s acoustics from a different location. I immediately scurried up and grabbed a front row seat in that magical new zone behind the orchestra, right above the percussion section. I was tickled when a few orchestra pals saw me up there and merrily waved hello. Mindy Kaufman in the woodwinds! Joe Alessi amid the trombones! I felt as giddy as an eight-year-old about to sail upward on a Ferris wheel.

When the Philharmonic launched into the “Mambo” from my dad’s very own West Side Story, I nearly pitched myself onto the bongos in my excitement. How grand it felt to be hearing my father’s own music ringing out, played by his longtime band, right there in the hall where they’d worked together for nearly three decades. A hall with a history -- and now it was beginning a bright new relationship with its city. As I walked back to Leonard Bernstein Place to catch my train, I thought to myself: This is the stuff that makes getting older really pay off.

I can’t wait to return for my next Philharmonic concert. I wonder what I’ll hear, and where I’ll be sitting? And of course, there’s one more thing I need to check out: are the corridors still good for playing horse? 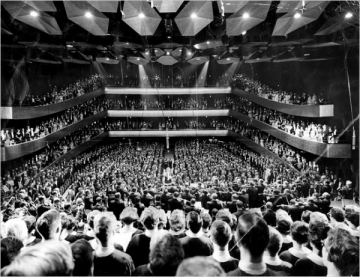 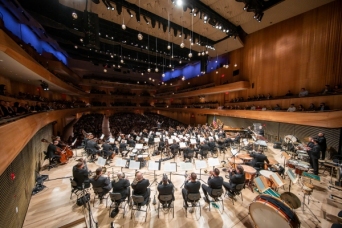 Photo by Chris Lee. Courtesy of the New York Philharmonic.

“Now the sound, like the whole experience of being there, is far more immediate and warm.”
– The New York Times

“a phenomenal achievement"
– The Telegraph