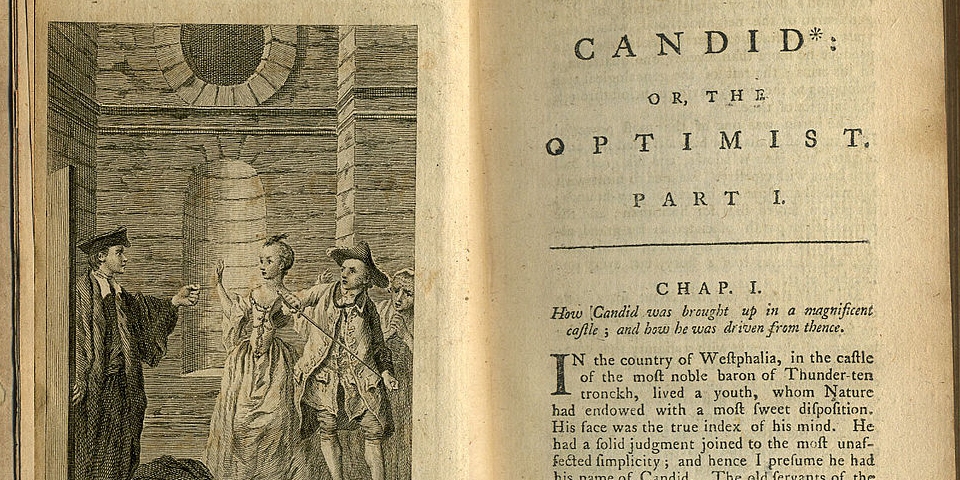 In 1953, the renowned playwright Lillian Hellman proposed to Leonard Bernstein that they adapt Voltaire's Candide for the musical theater. Voltaire's 1758 novella satirized the fashionable philosophies of his day and, especially, the Catholic Church whose Inquisition routinely tortured and killed "heretics" in a ghastly event known as an "Auto da Fé" ("act of faith"). Hellman observed a sinister parallel between the Inquisition's church-sponsored purges and the "Washington Witch Trials," fueled by anti-Communist hysteria and waged by the House Un-American Activities Committee. Charged with rage and indignation, she began her adaptation of Voltaire's with lyricist John LaTouche and Bernstein, who wrote numerous musical sketches. Before long, LaTouche was replaced by poet Richard Wilbur. Hellman, Bernstein, and Wilbur worked periodically over the next two years but labored in earnest through 1956, a year when Bernstein was simultaneously composing West Side Story. By October 1956, Candide was ready for performances in Boston, where Dorothy Parker contributed lyrics to "The Venice Gavotte" while Bernstein and Hellman had also added lyrics of their own to other numbers. The lyricist credits were already beginning to mount up.

Although the theme of political aggression originally attracted Lillian Hellman to the project, her sharpest writing on the topic was ironically jettisoned while the show was still out of town. The director, Tyrone Guthrie, became too nervous about her “Auto da Fé” scene specifically, as it directly satirized the House Un-American Activities Committee. It would appear that the urgent political impetus for writing the musical was the one aspect of the work that didn't stand up to the test of time. The original Broadway production, with sets by Oliver Smith and costumes by Irene Sharaff, opened at the Martin Beck Theater in New York on December 1, 1956 to mixed reviews and closed on February 2, 1957. Fortunately, the original cast album was recorded by Columbia Records, so the music thrived. The recording sold well, and Bernstein's score gained a sort of cult status.

In 1958, a full-scale production in London, England, was prepared, with a revised book credited to Lillian Hellman assisted by Michael Stewart, and one new musical number ("We Are Women," a duet for Cunegonde and the Old Lady, with lyrics by Leonard Bernstein). Candide opened on the West End at the Saville Theater on April 30, 1959. In the United States, there was no major production until 1966, when Gordon Davidson directed Candide for the Center Theatre Group at the University of California at Los Angeles, with Carroll O'Connor in the role of Pangloss.

In 1971, the Los Angeles Civic Light Opera Association mounted a production in which Sheldon Patinkin attempted a complete revision of Hellman's book with a substantial shuffling of musical numbers. This version was performed in San Francisco, Los Angeles, and later at the Kennedy Center in Washington, D.C. It is probably at this time that Mr. Bernstein wrote the song "Words, Words, Words," which includes a bitter reprise of "The Best of All Possible Worlds." Though this production was not successful, it seems to have stirred up interest in Candide. In 1973, Harold Prince and Hugh Wheeler devised a new small-scale version which drew the ire of Lillian Hellman, who at this time withdrew her original adaptation of Voltaire. Thus, the 1956 version of Candide is no longer available for performance.

This new version opened at the Brooklyn Academy of Music's Chelsea Theater in December, 1973. Harold Prince directed a free-wheeling single-act production, which included some new lyrics by Stephen Sondheim, and a thirteen-instrument orchestration by Hershy Kay. When this production moved to the Broadway Theater in Manhattan, the theater itself was rebuilt from the inside out: walkways and platforms were constructed around the auditorium, and the audience sat on wooden benches, right in the middle of the action. The audience was even invited to eat peanuts during the show, adding to the circus-like atmosphere. The young and lively cast, and spirited musical direction by John Mauceri, helped make this production Candide's first critical and popular success. (Known as the "Chelsea" version, this is the earliest version of Candide available for performance.)

In October 1982, New York City Opera (Beverly Sills, general manager) presented Candide in its first version for an opera house. As a full length two-act production, a great deal of music that had been cut in 1973 was reinstated, under Mr. Bernstein's supervision, by John Mauceri. New scenes were adapted from Voltaire by Hugh Wheeler, and once again Harold Prince directed.

As music director of the Scottish Opera in Glasgow, John Mauceri took the opportunity to examine Candide one more time in 1988, with a production that included even more music, including a new "Entr'acte" and a recurring chorale, "Universal Good," created by Mr. Bernstein from a long-discarded aria. Jonathan Miller and John Wells directed and further adapted Hugh Wheeler's script. After Mr. Bernstein had attended the final rehearsals and the opening in Glasgow, as well as a production later in the season devised by Jonathan Miller for the Old Vic in London, he decided the time had come for the composer himself to re-examine Candide. Taking the Scottish Opera version as a base, he restored, among other things, two dozen bars in the "Auto-da-Fé," shuffled the order in the second act, and touched up the orchestration throughout. For example, he altered the endings of several numbers, including "Glitter and Be Gay," where he placed chords on off-beats in the manner of Tchaikovsky, whose Fourth Symphony he had just conducted.

This revised and renewed version of Candide was presented by the London Symphony Orchestra in concert at the Barbican Centre, London, England, in December, 1989, and was recorded by Deutsche Grammophon and taped by Video Music Productions. Leonard Bernstein and John Wells created a narration, performed at the time by Adolph Green, that moved the action swiftly from one musical number to the next.

Harold Prince continues to direct Candide: in 1994 he directed the New York City Opera version (1982) at the Chicago Lyric Opera, and in the Spring of 1997, Mr. Prince directed Candide for Livent, on Broadway. It had been more than twenty years since Candide had a Broadway production. This was also the 1982 New York City Opera version, with yet more lyrics supplemented by Stephen Sondheim. In 1994, the engraving of the Scottish Opera version became available from Boosey & Hawkes, in a piano/vocal as well as in a full score (with engraved orchestral parts). While this publication encompasses the complete score, it by no means reflects a final, frozen show. Like its hero, Candide is perhaps destined never to find its perfect form and function; in the final analysis, however, that may prove philosophically appropriate.

Throughout the Leonard Bernstein Centennial, Candide received 342 performances by opera companies and ensembles in 25 countries across Africa, Asia, Australia, Europe, and North and South America, and in 34 US states. According to Bachtrack.com's 2018 statistical performance survey, Candide rose from being the 92nd most performed opera (world-wide in 2017), to the 11th most performed opera (world-wide in 2018).

Related Content
IBDB
In 'Candide,' Bernstein Fuses Philosophy And Comedy (from NPR)
7 Operas That Played on Broadway (from Playbill)

There are five versions of Candide available to license; however, the original 1956 version is no longer available for performance.

Overture to Candide for Band

To purchase sheet music for Candide, please visit our store.

Playbill from the Broadway Opening, 1956 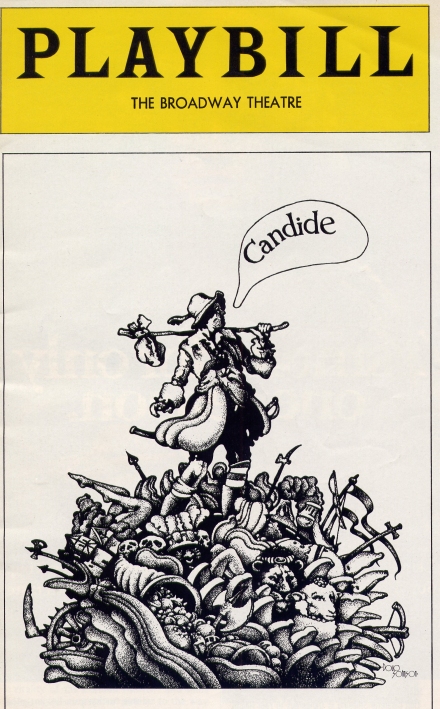 First page of the manuscript of the Overture to Candide 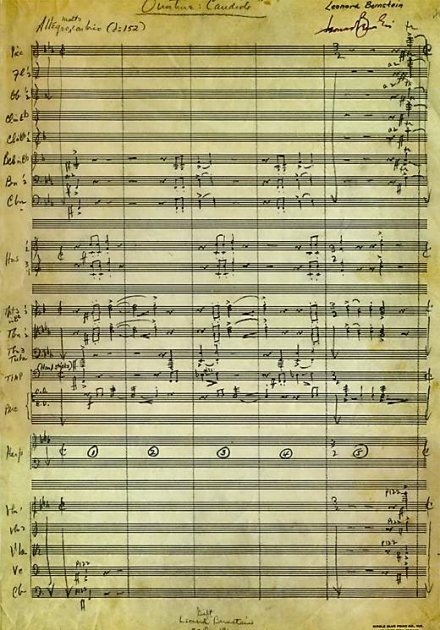 The beginning of the piano-score for Make Our Garden Grow 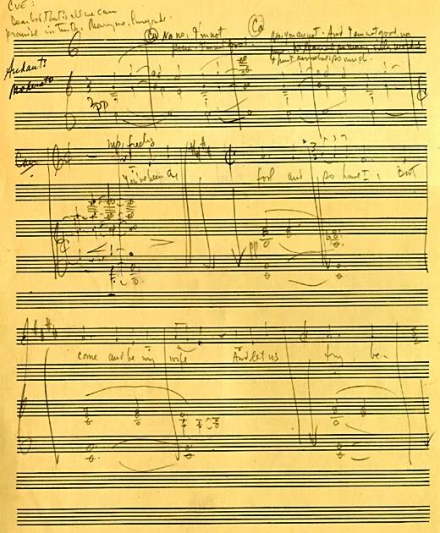 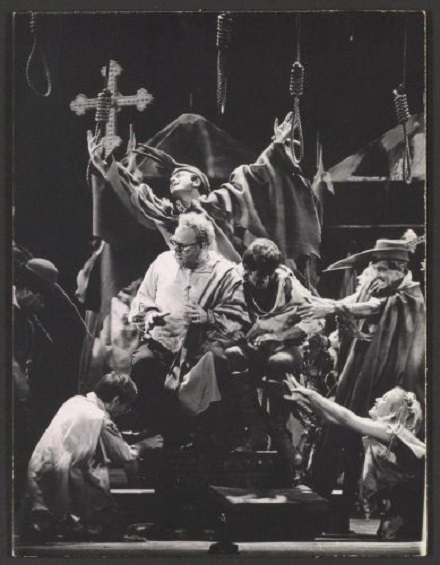 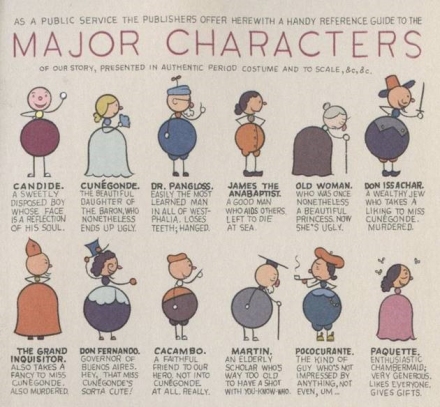 For their 90s-themed production of Candide in 2019, the Philadelphia Orchestra created a VH1-style Pop-Up informative video