In the summer of 1939, shortly after graduating from Harvard, Leonard Bernstein made a sketch for what he described as a "Hebrew song" for soprano and orchestra, based on a text from the Book of Lamentations. He soon set it aside, however, as he plunged into his conducting studies at the Curtis Institute of Music. A few years later when Bernstein began to compose his first large-scale orchestral work, he realized that his "Hebrew song" would be a logical conclusion to the two movements he had planned. Jeremiah was a major Hebrew prophet of great suffering who warned the Israelites that their sinfulness would lead to disaster, and his prophecy was fulfilled when Solomon's Temple was destroyed and Jerusalem fell to the Babylonians in 587 BCE. Jeremiah's Lamentations express his deep sorrow over the resulting desolation, as well as hope for the people of God.

Bernstein decided to enter his Jeremiah Symphony into a competition organized by the New England Conservatory, for which his Tanglewood conducting mentor Serge Koussevitsky was serving as chairman of the jury. He made significant changes to his song sketch, shifting the vocal part to mezzo-soprano, and in a frantic burst of activity, he worked around the clock to complete the entire symphony before the December 31, 1942, deadline. Bernstein enlisted his sister Shirley and friends David Diamond and David Oppenheim to help with copying and proofreading, and his roommate Edys Merrill hand-delivered the score to Koussevitsky's Boston home on New Year's Eve. He did not win the competition, but his Jeremiah Symphony would nonetheless bring him great success.

Bernstein decided to send the score to Koussevitsky and to his Curtis Institute conducting teacher, Fritz Reiner, for their feedback. Reiner loved it and immediately invited Bernstein to conduct it with the Pittsburgh Symphony in the fall of 1943; however, he tried to persuade his former student to add a fourth, more uplifting movement. Bernstein wrote in a letter to his friend and mentor Aaron Copland, "He is most anxious for the fourth movement; insists it's all too sad and defeatist. Same criticism my father had; which raises Pop in my estimation [to] no end. I really haven't the time or energy for a fourth movement. I seem to have had my little say as far as that piece is concerned."

Despite Koussevitsky's initial lukewarm response to Jeremiah, he invited Bernstein to premiere it in Boston as soon as he caught word of Reiner's enthusiasm. Reiner had already made arrangements to have the work performed, however, and Jeremiah had its premiere on January 28, 1944 at the Syria Mosque in Pittsburgh, Pennsylvania, with Bernstein himself conducting the Pittsburgh Symphony Orchestra and mezzo-soprano Jennie Tourel as the soloist. The performance was a complete success. Three weeks later, Bernstein conducted it with the Boston Symphony, and again, it was a triumph. In March and April he conducted it four times with the New York Philharmonic, and in May the New York Music Critics Circle voted it outstanding new classical work of the season. Jeremiah was broadcast on seventy radio stations across the country, and over the next few years Bernstein conducted it in Chicago, New York, St. Louis, Detroit, Rochester, Prague and Jerusalem.

The remarkable success of Jeremiah came just a few months after Bernstein's legendary conducting debut with the New York Philharmonic as a substitute for Bruno Walter on November 14, 1943. When Bernstein's father Sam, who had not been supportive of his musical ambitions, saw the overwhelming response of the audience that afternoon at Carnegie Hall, he came backstage, overcome with emotion, and there was a great reconciliation between father and son. In that moment, the young composer/conductor decided to dedicate Jeremiah to his father.

With Jeremiah, Bernstein not only established himself as a major American symphonist, he began a musical and dramatic exploration of a theme that would continue to inspire many of his major works throughout his career. "The work I have been writing all my life," he said in 1977, "is about the struggle that is born of the crisis of our century, a crisis of faith." While Jeremiah offers only consolation and not a solution to this crisis, Bernstein's creative journey through The Age of Anxiety (1949), Kaddish (1963), Chichester Psalms(1965) and, finally, Mass (1971), led him to a profound conclusion—that a renewal of faith in modern times requires a return to innocence, a shedding of the trappings of dogma and orthodoxy, and a fundamental belief in our common humanity.

The 25-minute Jeremiah Symphony consists of three movements: I. Prophecy; II. Profanation; and III. Lamentation. The first two movements are instrumental and the third features a mezzo-soprano soloist, singing a Hebrew text from the anguished poems of Jeremiah's Book of Lamentations. While not as explicitly theatrical as his later symphonies, The Age of Anxiety and Kaddish, Jeremiah is clearly motivated by a strong dramatic impulse. As Bernstein described it in his program notes for the March 1944 New York Philharmonic performances:

"The intention is ... not one of literalness, but of emotional quality. Thus the first movement ('Prophecy') aims only to parallel in feeling the intensity of the prophet's pleas with his people; and the Scherzo ('Profanation') to give a general sense of the destruction and chaos brought on by the pagan corruption within the priesthood and the people. The third movement ('Lamentation'), being a setting of poetic text, is naturally a more literary conception. It is the cry of Jeremiah, as he mourns his beloved Jerusalem, ruined, pillaged and dishonored after his desperate efforts to save it."

Bernstein goes on to explain some of Jeremiah's musical sources:

"The Symphony does not make use to any great extent of actual Hebrew thematic material. The first theme of the Scherzo is paraphrased from a traditional Hebrew chant, and the opening phrase of the vocal part in the Lamentation is based on a liturgical cadence still sung today in commemoration of the destruction of Jerusalem by Babylon. Other resemblances to Hebrew liturgical music are a matter of emotional quality rather than of the notes themselves."

Bernstein's longtime associate Jack Gottlieb has pointed out that Jeremiah contains more motives based on specific Jewish liturgical sources than Bernstein was consciously aware—a testament to his religious upbringing, which had been deeply infused with synagogue music and Hebrew studies. Most notably, each movement uses variations on two combined themes, one that comes from the Amidah (a solemn prayer of the 'Eighteen Blessings,' used on festival mornings), and one from the K'rovoh (the poetic expansion of the 'Eighteen Blessings' by the cantor). Musically, each new section develops thematic material from the previous one. As Gottlieb has noted, the three movements constitute "a giant sonata-form wherein the movements are, successively, the exposition, development and recapitulation."

Throughout the Leonard Bernstein Centennial, Bernstein’s three symphonies saw a particularly noteworthy increase in performances, with Symphony No.1: Jeremiah receiving 96 performances by 56 orchestras in 23 countries across Asia, Australia, Europe, and North And South America, and featuring 33 mezzo-sopranos. Leading orchestras that championed all three symphonies during the Centennial include the New York Philharmonic, Shanghai Symphony Orchestra, Real Orquesta Sinfonica de Sevilla, and Orchestra dell'Accademia Nazionale di Santa Cecilia. The latter’s recording of the symphonies under the baton of Antonio Pappano garnered critical acclaim.

To purchase sheet music for Symphony No. 1: Jeremiah, please visit our store. 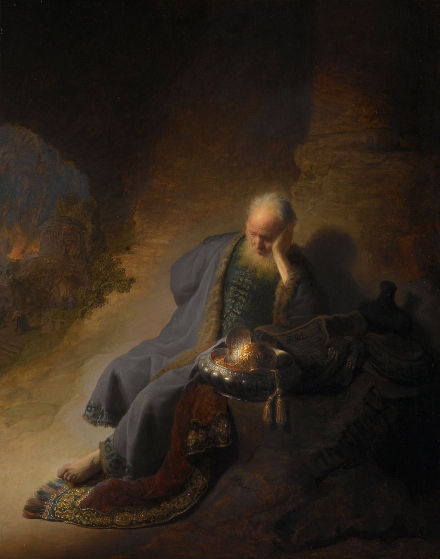 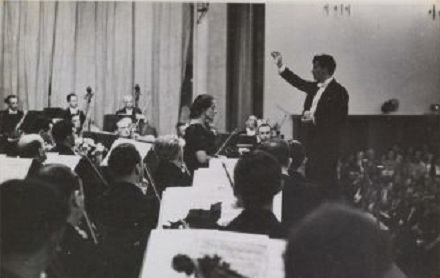