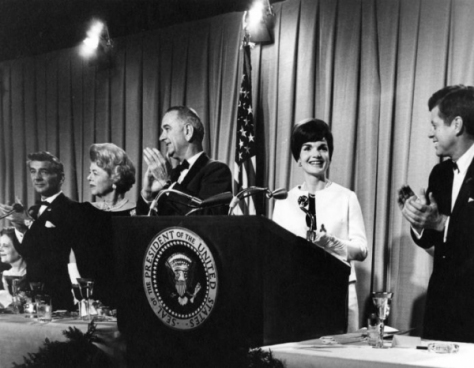 Leonard Bernstein would have loved TV’s President Bartlet. Or imagine him with real life politicos Hillary and Bill Clinton. Or Bernstein alongside Barack! Fantasy aside, Bernstein’s relationships with actual U.S. presidents spanned a period of tremendous change in America. They were as diverse as they are intriguing. They ranged from imaginary to intimate to ill-tempered. And they provide yet another novel way to view the incredible scope of Bernstein’s life.

In The Infinite Variety of Music, Bernstein explains his imaginary relationship with President George Washington, which stretched back to his childhood. He envisions General Washington as a traveling companion to whom he explains modern inventions. Washington, in turn, provides Bernstein with questions whose answers are precisely what Bernstein wants to discuss:
G.W. You mean we are not a musically cultured nation? But I thought –
L.B. No, we’re not, really. Not yet, anyway; although we may be well on the way…

History’s most influential music teacher, Bernstein never wavered from his message: music and education enhance society. While he was revered worldwide for his musical genius, he was also a lifelong advocate for peace, civil rights and support for the arts. Bernstein ranks legendary as an American liberal activist. Depending on the politics involved, Bernstein either hailed to or railed against the Chief.

One year before his death, Bernstein and I had a meeting of the minds. He asked me to tune up a draft letter he’d written to President George H.W. Bush. A symbolic gesture to garner public attention, Bernstein’s letter rejected the National Medal of the Arts to protest censorship. Bernstein chose not to “collect a medal in kind and gentle silence while hoping for less stifling days ahead.” News coverage appeared on the front pages of the Washington Post and the New York Times.

In exchange, I asked Lenny to review a speech I’d written for Senator Bill Bradley, called Playing Patriotism. My draft for the basketball-legend-turned-politician intrigued Bernstein. In blue editor’s pencil, he strengthened the speech page by page, starting with: “We must rescue patriotism from the bigots!” Finally, in red: “No more flag-burning campaigns, white against black campaigns, abortion campaigns, tax-breaks-for-therich campaigns.” For a last line, Bernstein suggested: “Only then can we Play Ball!”

Timely even today, Bernstein's edits hearken back to the last liberal POTUS he knew: Jimmy Carter. Both Bernstein and Carter rode the wave of patriotism surrounding America’s Bicentennial. Bernstein campaigned for Carter’s first presidential bid, and again at Carter’s reelection attempt. Their friendship transcended borders. Bernstein’s last White House visit was perhaps his most memorable. At a gathering preceding the Kennedy Center Honors, honoree Bernstein received permission from the President to take his entire family to the Lincoln Bedroom to light the Hanukkah candles. As the time arrived to leave for the Kennedy Center, Bernstein placed the still-burning candles on the bathroom sink, praying he wouldn’t burn the White House down that night. 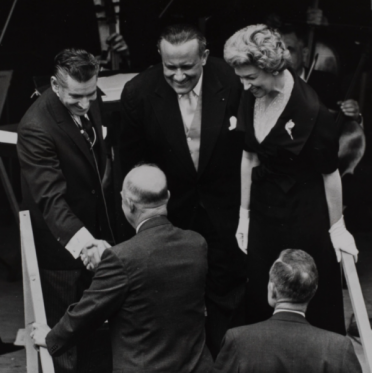 It’s interesting that Bernstein’s White House relationships didn’t always fall along party lines. In the mid-1940s, Democrat Harry Truman launched Bernstein’s nowinfamous FBI file. In 1950, thanks to Bernstein’s early and insatiable liberal activism, Truman banned Bernstein’s music from overseas State Department libraries and functions. Truman cancelled his own attendance at a New York function with Chaim Weizmann, the first president of Israel, where Bernstein was to perform. (There was no love lost between them, however; years later, Bernstein was among the celebrities to appear during a televised celebration for former President Truman’s Diamond Jubilee.)

Bernstein developed a closer personal relationship with Republican President Eisenhower than with Truman. However, Eisenhower followed Truman’s lead by also covertly expanding Bernstein’s FBI file. In 1953, citing security risks, Eisenhower’s State Department pulled Bernstein’s passport, releasing it only after Bernstein signed an affidavit disavowing Communism. (Bernstein made it to Milan’s La Scala in the nick of time to conduct Maria Callas in her legendary Sonnambula.)

Eisenhower in turn used Bernstein as ammunition in his “cultural” Cold War. Eisenhower believed that the U.S. needed to compete culturally with the USSR in order to sway public opinion abroad. In the spring of 1959, shovel in hand, Eisenhower joined Bernstein in New York at Lincoln Center’s groundbreaking ceremony. Later that year, the US government sent Bernstein and the New York Philharmonic to Moscow to gain an advantage in the arts over the Soviet Union. The mission scored Eisenhower some political success. 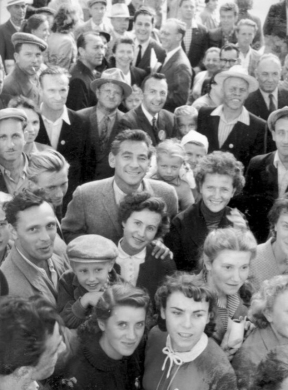 Leonard Bernstein on a State Department tour, Moscow, 1959. Photo courtesy of the Library of Congress.

From the mid-50s to the early ‘60s, America saw Rosa Parks refuse to budge; the Surgeon General link cigarettes to lung cancer; Eisenhower sign the Civil Rights Act; West Side Story open on Broadway; and for the first time ever in presidential politics, a televised debate between Nixon and JFK.

Beyond tapping the power of TV, Bernstein and JFK had in common their home state of Massachusetts and their alma mater, Harvard. President Kennedy and his wife attended the opening of Candide – itself an attack on the stifling days of anti-Communist fervor under Truman and Eisenhower. Not only were the Bernsteins frequently on Kennedy guest lists; they were also invited behind the scenes for less formal presidential gatherings. After a White House dinner celebrating Igor Stravinsky’s 80th birthday, for example, Bernstein and his wife were among a small group invited to the family quarters. So comfortable did Bernstein feel in the private rooms of the Executive Residence that he sat himself down in JFK’s favorite rocking chair and pretended not to hear Felicia Bernstein’s urgent admonitions for him to get up.

It’s been argued that in some ways Bernstein never fully recovered from the assassination of JFK. Bernstein kept a signed photo of President Kennedy on his piano. He dedicated his Symphony No. 3: Kaddish to the late president and composed his Mass for the opening of the John F. Kennedy Center for the Performing Arts, at the request of Mrs. Kennedy.

Bernstein on JFK: “Of all the political men that I have ever met, [JFK] was certainly the most moving and compassionate and lovable.” 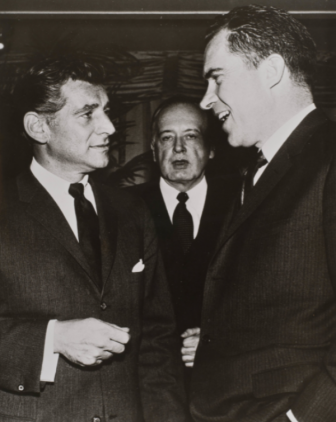 While Bernstein’s relations with JFK were as warm as they could be, his connection to Richard Nixon was more on the ill-tempered side. As a sort of political warm-up act to Bernstein's State Departmentsponsored cultural exchange concerts, Vice President Nixon also toured the Latin American capitals. Crowd after crowd booed Nixon, while Bernstein subsequently received standing ovations.

By the time Nixon became POTUS, the U.S. was a world power with New York City as its cultural capital. Bernstein, now leader of the NY Philharmonic, played a lofty role. Perfunctory were the public exchanges between Bernstein and Nixon. One very high-level public appearance by President Nixon was cancelled altogether. In the summer of 1971, the FBI warned President Nixon to avoid the premiere performance of Mass, Bernstein’s de facto protest against Nixon’s war machine. According to Nixon aides, the Latin text of the piece might contain secret anti-war messages. The specific reference, it turned out, was the standard liturgical line “dona nobis pacem,” or “grant us peace.” Hardly a radical sentiment; nonetheless, the Nixon administration concluded that it might cause embarrassment should the President be televised applauding. So, no Nixon.

Upon Nixon’s reelection, Bernstein conducted Haydn’s Mass in the Time of War at National Cathedral, and called the event the Anti-Inaugural. No surprise then, when Nixon handily added Bernstein to his illustrious Enemies List – a Who’s Who of powerful leftists who were subject to undue IRS scrutiny and other intense investigation.

But sometimes the White House wires got crossed. For years, in a bathroom of Bernstein’s Connecticut home hung a framed piece of double presidential memorabilia: Nixon’s infamous “Enemies List” (available at the time in novelty stores) set next to a holiday card from the Nixon White House. Under the generic season’s greetings Bernstein scribbled: “With special love from Dick & Pat.”

In the wake of Nixon’s resignation due to Watergate, Bernstein breathed a sigh of relief: “We have come out of the muddy, murky and treacherous period that has been going on since Kennedy’s murder.”

Bernstein’s vision for America was clear and steady. During the last year of his life, I saw him striving still to make the world a better place. He continued to display a purity of passion and purpose. He espoused peace over war. Always – education is our lifeblood. Music should be listened to and learned, not merely overheard. And of all we can feel, what matters most is love. Let’s get those Bernstein notions into a Presidential speech. Then, indeed, we may be well on the way.

Leonard Bernstein and Mark Taylor became friends in 1989. They traveled together to Washington, D.C.; Key West, Florida; Germany during the fall of the Berlin Wall; and Japan for the establishment of the Pacific Music Festival.