The Path to MASS: Recollections from the First Celebrant

The Path to MASS: Recollections from the First Celebrant 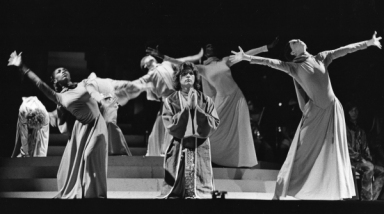 THE BEGINNING
I received a call in August of 1971 that auditions were being held in New York for the opening of the new Kennedy Center, with a new work being composed by Leonard Bernstein. Was I interested in auditioning? Yes!

Auditions were held in the now-defunct Steinway Hall on 57th St. When I walked into the room where the audition was being held, LB was there along with conductor Maurice Peress. I knew Maurice, having worked with him the previous year in a production of La Boheme in Washington D.C. (Fate was already in action.)

I went to the tryout dressed in a jeans suit and carrying my guitar. I began with the opening bars of Harry Belafonte’s rendition of “Water Boy.” I realized, later, that I had presented myself exactly how LB envisioned the opening of MASS: a young man with a guitar. It was that first impression, I thought later, which probably clinched for me the role of the Celebrant. After a gut-wrenching week of anticipation, I was informed that I had been selected for the role of the Celebrant, and to report for rehearsals in New York. 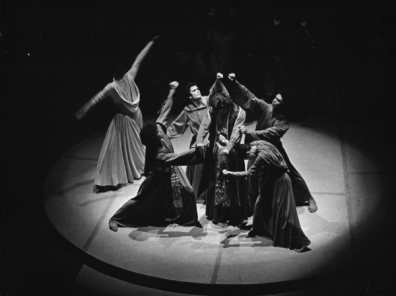 FIRST REHEARSALS
I’ll never forget my first encounter with LB. Rehearsals began in an immense ballroom which bordered the famous Ansonia hotel on 71st Street. As we approached each other from opposite ends of the room, I burst into Wreck’s refrain from Wonderful Town, which I had performed in high school: “Cause I could paaaass that football...” He smiled, shook my hand, and said “Let’s get to work.” Any nervousness on my part was dissipated by his friendliness and warmth.

We were the only ones in the room, with two chairs and a piano. I stood waiting for him to play something on the piano, but instead he pulled up one of the chairs and straddled it. As I remained standing, he began guiding me as to how he wanted me to sing “Simple Song.” In his gruff voice, but with perfect intonation, he demonstrated the colors of the piece: the pianos, the fortes, the portamentos, the entire shape of this swingy, jazzy composition. I became totally immersed in its beauty and immediacy—as have many others after me who heard this captivating piece of music. What a blessing to have the honor to be the voice of LB.

As rehearsals progressed, the cast feverishly worked to prepare for the premiere. We had only about six weeks—a very short period of time to launch such a complicated and yet delicate creation.

LB was still working on the Celebrant’s big mad scene, “Things Get Broken;” there were a mere three weeks to go, and the number was still not finished. One day LB burst into our rehearsal, pulled me aside and told me he had completed it. He invited me to come to his Park Avenue residence that night to play it through.

It was early evening as he escorted me into his studio, with its books and scores. He sat at the piano next to the wall and began screaming hoarsely: “PACEM, pacem pacem, PAAAA— CEM!!”

I stood riveted. He stopped to explain the twelve-tone row he’d used from Beethoven’s Ninth Symphony at the beginning of the number, then continued to play through the first half, as I stood there entranced, comprehending the immense power and challenge which lay before the both of us. He stopped again, halfway through, and played a certain chord over and over again—as if he had found the proverbial “lost chord.” “Doesn’t that sound like something out of Parisifal?” he yelled, then resumed where he’d left off, continuing to go “mad” in front of me. After he finished, we both looked at each other, stunned. “Jesus,’’ I said, openmouthed. What more could I say.

No further words were said. Quietly he ushered me out of his apartment. I took the subway to my home in Brooklyn, my head completely blank. “How am I going to do this?” I asked myself. But just as with “Simple Song,” he’d guided me note by note. I didn’t have to interpret anything. Whew!

(Later on, when LB and I collaborated in making the recording, we were in total sync. “Things Get Broken,” this 14-minute mad scene, was completed in one take. Someone said afterwards: “A miracle.”) 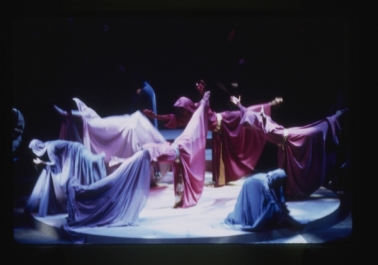 WASHINGTON, D.C.
The cast traveled to Washington in a big bus. The atmosphere was very tense. No one uttered a word on the entire journey; we were in the final stretch. We were housed at the Howard Johnson Motor Inn, about a five-minute walk to the JFK center. As I walked to the venue, passing the now famous Watergate Hotel, I thought to myself: “How can I reduce this nervousness?” I decided I had to separate the task from the hype. “Concentrate on the job you’ve got to do; you’re the performer, not the audience,” I said to myself. This idea seemed to work, as I calmed down a bit.

We all gathered in one of the big rehearsal rooms in the basement of the brand-new building. The cast sat down, waiting for the Maestro. He entered, spoke privately to the directorial team, and then turned to us as we waited with bated breath. He thanked us for our work, and then explained his concept of MASS to us.

The first words he said were: “This work has no leading role.” WHAT? my brain screamed; what the heck if the Celebrant is not the leading role? I had to push back on this. After the rehearsal, I immediately called my agent and PR rep, Peter Gravina, and explained the situation. I didn’t argue about this matter directly with LB. I thought: This is what agents are supposed to do. After all, why bring any negative vibes to this project? After a week of silence, LB and the team must have agreed with my point of view; they acquiesced. Since the programs and posters advertising MASS had all been printed, an insert was printed for the program, and a long strip of paper was pasted across the big poster in front of the theatre, highlighting the role and my name. Ya gotta stand up for yourself sometimes. 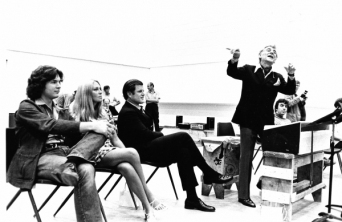 OPENING NIGHT
The excitement, the dignitaries, the press, the photographers were everywhere. I got to the theatre about an hour before curtain. I felt remarkably calm, remembering that old Ethel Merman quote when a cast member asked her before the opening of Gypsy: “Are you nervous?” “Why?” replied Ethel; “I know my lines.” I guess we also felt reassured by the imprimatur of the greatest musical minds on the planet.

My PR agent came to my dressing room about fifteen minutes before curtain to check on me, and said, “There are 181 critics in the audience. Be good.” Well, I knew my lines.

The atmosphere in the hall was electrifying: the anticipation of experiencing a new work created especially for this new cultural center. We could feel it, even before the Kyrie started. I took my place in the darkness on the stairs, staring into the dark hall filled with people, and nearly visualizing that big question mark emanating from the public as they listened to the disjointed, pre-recorded voices singing the Kyrie from the four corners of the hall. I could almost hear the questions in the air: “Oh no, this is some electronic gobbledygook: are we trapped? An hour and a half of this?”

And then that moment came: spotlight, first guitar chord, and I was on. One of the most unforgettable moments of my life. I opened my mouth and the first tones came out. After two bars, I knew we had them; this was going to be fantastic. When the marching band came on, we could feel the crowd thinking: “Oh, Lenny, Lenny this is great, this is what we came for, give us more.” The audience was enthralled. We could feel it. Afterward, when LB came out for his bow, oh God, the heavens opened; never have I heard such a roar. We were all crying our eyes out and Lenny was a mess, a puddle of tears. At that moment, I had the impulse to put my colorfully embroidered guitar strap around his neck, his Olympian laurel leaf symbolizing the gentle honor of his work. The ovation lasted for hours, it seemed.

There was one little fly in the ointment, though. During the last week of rehearsals, Roger Stevens, founding chairman of the new JFK center; director Gordon Davidson; and music director Maurice Peress were all bugging LB to make some cuts in the piece; they felt it was too long. LB resisted at first, but relented and agreed to put in the cuts for the dress rehearsal. The performance of the dress was really good; the invited audience really liked it, and we felt we had a “hit” on our hands. But... after the performance, LB said: “OK, you guys have had your f---ing fun; now restore the cuts.” Nobody in the cast really noticed if it made a difference, but when the reviews came out the day after the opening, and they were—mixed, I would say is the proper word, we all thought: Maybe the production team had been right.

But then I thought: well, why would Michelangelo want to chop off the finger or toe or arm of David? I mean, Leonard Bernstein the composer understood how a whole section had a whole structure. Why would he want to tear a piece out? That’s sacrilege. Sure, he cared about the public success. But he also wanted to see everything that he put on paper realized. Because he had a big idea. I mean, would you cut a Mahler symphony?

Alan Titus is an internationally celebrated baritone, having performed in major opera houses with leading conductors through out the world.