On December 8, 1959, Leonard Bernstein and the New York Philharmonic presented a program of Bach, Bartok, and Brahms in Bridgeport, Connecticut. At the end of the evening, after greeting his fans backstage, the Maestro became aware that two of his batons were missing. 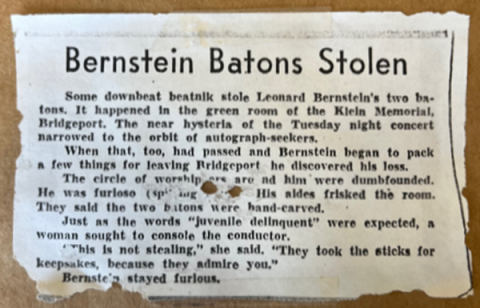 Now, after all these years, one of those batons has been returned to the New York Philharmonic by the over-zealous fan’s son. The son explained that his father "was so caught up in the moment after this concert in Bridgeport that in his determination to get Mr Bernstein's autograph, he came upon the baton and decided it was meant for him! It's not an excuse, but I understand how he got so overwhelmed that he couldn't think straight! I don't remember him having any regrets about this incident, which speaks to his obsession. I have forgiven him (my older brother hasn't!). My father, who has passed away, would be so pleased to know that this baton is now in its rightful place, in the archives of the New York Philharmonic." 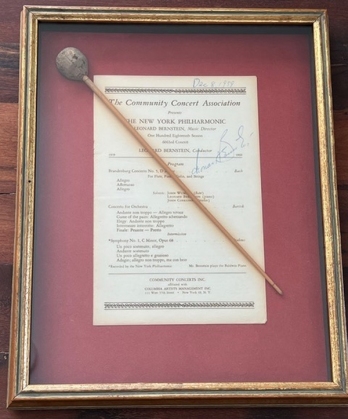 (But we cannot help but wonder: what happened to the other baton?)