New Book & Exhibition: The American Theatre As Seen By Hirschfeld

The American Theatre As Seen By Hirschfeld with a stunning new 256-page book and a new exhibition launching the opening of the new Museum of Broadway in Times Square. David Leopold, Creative Director of The Al Hirschfeld Foundation is curator of the exhibition and editor of the new book. 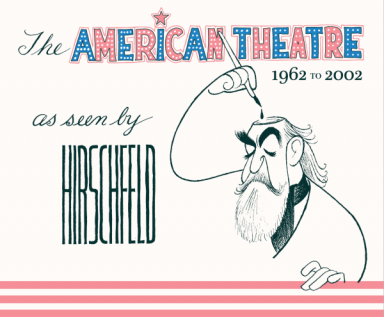 ABOUT THE NEW BOOK, THE AMERICAN THEATRE AS SEEN BY HIRSCHFELD, 1962 – 2002
Available November 15. Now available for pre-order at www.AlHirschfeldFoundationShop.org.

The American Theatre as seen by Hirschfeld 1962-2002 showcases Hirschfeld’s greatest theater work from five decades, including some of the most important productions from the last sixty years such as Hello Dolly!, Fiddler on the Roof, Funny Girl, Cabaret, Annie, Sweeney Todd, Les Misérables, Fences, Phantom of the Opera, Chicago, Rent, Angels in America, and Hairspray. This collection takes you backstage with portraits including Stephen Sondheim, Neil Simon, Edward Albee, Wendy Wasserstein, Tom Stoppard, and Hal Prince. With something for every type of theatergoer, this is the book theater lovers have been waiting for. Now for the first time, nearly 300 Hirschfeld drawings are collected in one volume that both shows and tells the story of nearly a half century of the American Theatre, most of which have never been collected in a book before.

When a first volume of The American Theatre As Seen by Hirschfeld was published in 1961, Hirschfeld himself designed and curated the book, featuring 250 works from the first 40 years of his career. It was Al Hirschfeld’s favorite collection, as it was for fans, garnering rave reviews, printing several editions, and is still highly prized by collectors today. Just before Hirschfeld died in 2003, he planned a sequel that would cover the other 40 years of his career, but the project was shelved with his passing …until now.

The American Theatre as seen by Hirschfeld 1962-2002 is inspired by the artist’s original design and curation of the initial volume. The new edition features a foreword by Michael Kimmelman, and chapter introductions by Brooks Atkinson, Brendan Gill, Maureen Dowd, Terrence McNally and Jules Feiffer. This is the largest collection of Hirschfeld’s theatre work that has ever been published.

The American Theatre as seen by Hirschfeld 1962-2002 is now available for preorder online at www.AlHirschfeldFoundationShop.org/AmericanTheatre and will be at www.Amazon.com starting November 15.

“No one saw more opening nights on Broadway than Hirschfeld, and both the new exhibition and bookshow his archive of drawings as a contemporaneous account of the productions and performers who helped shaped our popular culture over much of the 20th century, and into the 21st,” says David Leopold. “Here we are, 75 years after the first book collection of Hirschfeld work was printed, and 20 years after Hirschfeld's final drawing for The New York Times, yet Hirschfeld’s work continues to be as popular as ever with theater fans. Some may remember seeing the production Hirschfeld drew on stage. Younger theatre fans may see Hirschfeld’s art as their portal into theater history. Al Hirschfeld would be thrilled to know that his The American Theatre As Seen by Hirschfeld would come to fruition with a final edition at last, and honored to see his work exhibited as an inaugural exhibition at the long-anticipated opening of The Museum of Broadway."


ABOUT THE MUSEUM OF BROADWAY EXHIBIT,
THE AMERICAN THEATRE AS SEEN BY HIRSCHFELD:
The Museum of Broadway announced the first special exhibit that will be featured in the Museum, “The American Theatre as seen by Hirschfeld,” curated by David Leopold, Creative Director of The Al Hirschfeld Foundation. This new exhibition on display November 15, 2022 to March 15, 2023, is created exclusively for the Museum of Broadway, and takes visitors through nine decades of Hirschfeld’s iconic images of theater in this country through twenty-five drawings and prints from 1928 to 2002. Visitors will be brought face to face with the original productions of Fiddler on the Roof, The Phantom of the Opera, The King and I, Sunday in the Park with George, Funny Girl, Ragtime, Beauty and the Beast, and Hairspray, among others. Hirschfeld drew more posters for Broadway shows than any other artist, and two walls are in the exhibition are dedicated to posters, programs and album covers. Visitors will also be able to see a replica of Hirschfeld’s barber chair, where he drew all the finished drawings in his career, as well as a selection of sketchbooks that he used to record his initial impressions of shows in out-of-town tryouts and previews. Portraits of Meryl Streep, Julie Andrews, Stephen Sondheim, Liza Minnelli and John Leguizamo, many of them signed by their subjects, will also be on display, and visitors will have the chance to create a Hirschfeld portrait of themselves with a new app created exclusively for this exhibition. There will also be Hirschfeld coloring pages available to make the exhibition fun for visitors of all ages.

The Museum of Broadway is an immersive and interactive theatrical experience devoted to musicals, plays, and the people who make them. Featuring the work of dozens of designers, artists, and theatre historians, this one-of-a-kind Museum takes visitors on a journey along the timeline of Broadway, from its birth to present day, where the past, present, and future of Broadway come together like never before. For more information, visit www.TheMuseumOfBroadway.com and follow @museumofbroadway on all social channels.

The Museum of Broadway can be purchased www.TheMuseumOfBroadway.com/Tickets. These timed tickets start at $39, and a portion of every ticket sold will be donated to Broadway Cares/Equity Fights AIDS. 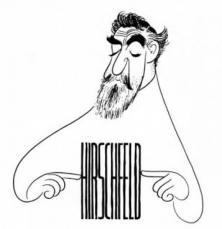 Al Hirschfeld’s drawings stand as one of the most innovative efforts in establishing the visual language of modern art through caricature in the 20th century. A self-described “characterist,” his signature work, defined by a linear calligraphic style, appeared in virtually every major publication of the last nine decades (including a 75-year relationship with The New York Times) as well as numerous book and record covers and 15 postage stamps. Hirschfeld said his contribution was to take the character, created by the playwright and portrayed by the actor, and reinvent it for the reader. Playwright Terrence McNally wrote: "No one 'writes' more accurately of the performing arts than Al Hirschfeld. He accomplishes on a blank page with his pen and ink in a few strokes what many of us need a lifetime of words to say." Manhattan Oases and Show Business is No Business in addition to 10 collections of his work. He was declared a Living Landmark by the New York City Landmarks Commission in 1996, and a Living Legend by The Library of Congress in 2000. Just before his death in January 2003, he learned he was to be awarded the Medal of Arts from the National Endowment of the Arts and inducted into the Academy of Arts and Letters. The winner of two Tony Awards, he was given the ultimate Broadway accolade on what would have been his 100th birthday in June 2003. The Martin Beck Theater was renamed the Al Hirschfeld Theater.

ABOUT THE DAVID LEOPOLD, CURATOR OF THE EXHIBITION, EDITOR OF THE BOOK AND CREATIVE DIRECTOR OF THE AL HIRSCHFELD FOUNDATION

David Leopold, the creative force behind both the new book and exhibition, has spent more than 30 years studying Hirschfeld’s work, the first 13 as Hirschfeld’s Archivist, visiting him in his studio once or twice a week. Now the Creative Director for the nonprofit Al Hirschfeld Foundation, Leopold’s previous book, The Hirschfeld Century: A Portrait of the Artist and His Age (Knopf), has been called by The Washington Post, “An instant classic.” Booklist declared, “Leopold emulates the economy and fluidity of Hirschfeld’s drawings in this star-studded, anecdote-rich, critically clarifying, and thoroughly enlightening portrait of the portraits.” He has earned rave reviews from audiences around the country for his illustrated presentations on the work of Hirschfeld.

The mission of the Al Hirschfeld Foundation is to promote interest in the theater and visual arts by supporting non-profit museums, libraries, theaters and similar cultural institutions. The Foundation fulfills its mission through grants and exhibitions of Hirschfeld’s art. The Foundation maintains an extensive collection of Hirschfeld artworks and lends and/or donates pieces to institutions all over the world. Another primary mission is arts education, which the Foundation does primarily with the Hirschfeld Arts Curriculum. Created in conjunction with the New York City Board of Education, The Hirschfeld Arts Curriculum is an innovative visual/performing arts education program based on Hirschfeld’s art to engage students K through 12 in a variety of arts activities. Our programs encourage writing, reading, researching, observing, movement and performance to learn about the arts, its history, and the opportunities for education and employment in the arts field. The web based Al Hirschfeld curriculum is easy to use, and is intended to be a free resource for teachers and students.www.AlHirschfeldFoundation.org