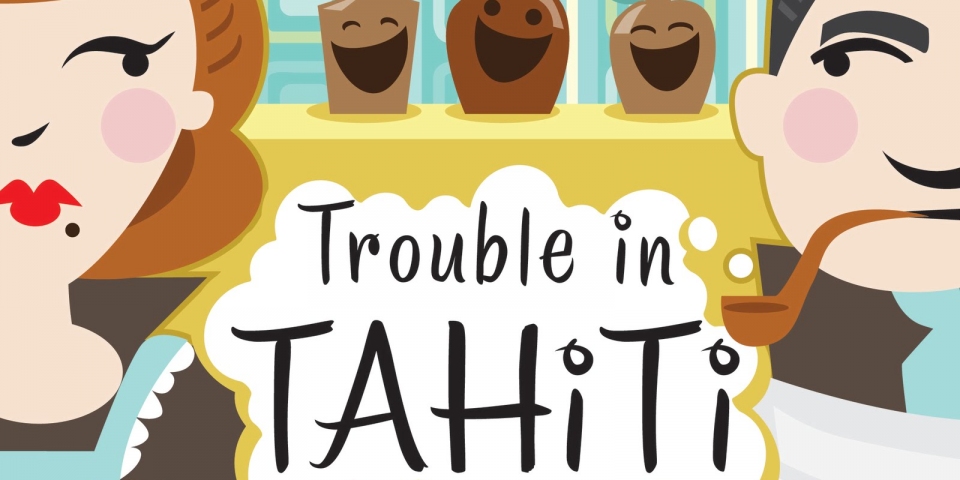 Leonard Bernstein was on his honeymoon in 1951 when he began composing his one-act opera, Trouble in Tahiti, a candid portrait of the troubled marriage of a young suburban couple. Written between his biggest Broadway successes— On the Town in 1944 and Candide and West Side Story in 1956 and 1957, respectively— Trouble in Tahiti draws upon popular songs styles to deliver an uncompromising critique of post-war American materialism. Beneath the couple's marital discord is a profound longing for love and intimacy. Their spiritual emptiness, in contrast to a veneer of happy consumerism, creates the heart of the drama and is emphasized by sudden stylistic shifts in the music. Bernstein dedicated the piece to his close friend Marc Blitzstein, who had led him toward music theater.

The opera begins with a vocal trio singing of idyllic middle-class life in 1950s suburbia. Their close harmonies, jazz rhythms and idealized representation of American life are evocative of radio commercials of the era. Throughout the 45-minute opera, the Trio functions as a contemporary Greek chorus, providing satirical commentary to the drama.

The opera focuses in on the domestic conflict of Sam and Dinah, a young couple who, in contrast to the perfect picture of suburban life painted by the Trio, are desperately unhappy. Starting with an argument over breakfast, the piece explores a day in their life—Sam's as a successful businessman, and Dinah's as a frustrated housewife. They argue about their son Junior, who is never seen or heard from. As the day continues, the competitive and over-confident Sam shows his prowess at the office and at the gym. Dinah visits her psychiatrist and recounts a dream of a beautiful, unattainable garden, then spends the afternoon at an escapist movie called "Trouble in Tahiti." At the end of the day, profoundly aware of their unhappiness, Sam and Dinah try to have a frank discussion about their relationship. Unable to communicate without blaming and arguing, Sam suggests they go out to see a new movie—"Trouble in Tahiti."

Trouble in Tahiti premiered in front of an audience of nearly 3,000 people in June 1952 at Brandeis University's Festival of the Creative Arts, an ambitious new arts festival directed by Bernstein. His brand-new opera came at the end of an all-day symposium that had gone over schedule, and the curtain didn't go up until 11 p.m. The outdoor stage had barely been built in time, and the amplification system was poor. Bernstein complained that his piece, which his Brandeis colleague Irving Fine had persuaded him to complete in time for the festival, had turned out "half-baked," and he was determined to improve it. He rewrote the last scene, and the opera was performed again that same summer at Tanglewood's Music Theater, where he felt it was much improved.

In November that year, Bernstein conducted a live performance that aired on N.B.C. Television Opera Theatre, featuring Beverly Wolff as Dinah and David Atkinson as Sam. The New York Times praised the work, noting its irony and how well adapted it was to the medium of television: "Watching it, one could hardly be sure it was not one of the regular programs. The trio at the microphone, the man being interviewed at this desk, the husband and wife eating breakfast were all out of the standard repertory. But Mr. Bernstein obviously uses these stock shots deliberately."

Finally, in April 1955, Trouble in Tahiti premiered on Broadway in an evening entitled "All in One," together with Tennessee Williams' play 27 Wagons Full of Cotton and several dances choreographed by Paul Draper. Starring Alice Ghostley as Dinah and John Tyers as Sam, it ran for 48 performances.

Trouble in Tahiti took an unusual path in the early 1980s. In 1983, Bernstein wrote a second opera, A Quiet Place (libretto by Stephen Wadsworth), as a sequel to Trouble in Tahiti, picking up the unhappy family drama thirty years later, when the estranged Junior and his sister Dede have returned home to be with Sam after Dinah has died. When it premiered at Houston Grand Opera in June 1983, A Quiet Place followed Trouble in Tahiti on a double bill, but afterwards, Bernstein and Wadsworth altered the structure to interpolate all of Trouble in Tahiti into A Quiet Place as two extended flashback scenes. Since then, Trouble in Tahiti has existed both as part of this larger work, and as the self-contained, original one-act, which continues to be performed regularly around the world.

Prelude – A smiling jazz Trio sings of perfect life in Suburbia, with its little white houses and happy, loving families.

Scene I – Sam and Dinah talk over breakfast, alternating between habitual bickering and lyrical moments of longing for kindness. Dinah accuses Sam of having an affair with his secretary, which he denies. She also reminds Sam that their son Junior's play is that afternoon, but Sam insists that his handball tournament at the gym is more important. They continue to argue until Sam leaves for the office.

Scene II – At work, Sam exudes confidence as he deftly handles business by telephone and promises to lend money to a friend. The Trio extols Sam's virtues.

Scene III – In her analyst's office, Dinah recalls a dream of an untended garden, choked with weeds ("I was standing in a garden"). In the dream, she hears a voice calling to her, describing a beautiful garden, a place of love and harmony, and she tries desperately to find it. Meanwhile, at Sam's office, he questions his secretary about their relationship, and when reminded of an incident, he insists that it was an accident and that she forget it ever happened.

Scene IV – Sam and Dinah accidentally run into each other on the street. Uncomfortable, each makes up an excuse so they won't have to have lunch together. After parting, they privately reflect in duet on the confusing and painful course their relationship has taken, and yearn for their lost happiness.

Interlude – Inside the house, the Trio sings of lovely life in Suburbia, detailing the comforts of the American dream.

Scene V – At the gym, Sam has just won the handball tournament. He sings triumphantly about the nature of men ("There's a law")— how some try with all their might to rise to the top, but will never win; while others, like him, are born winners and will always succeed.

Scene VI – Dinah has spent the afternoon at the cinema watching a South Sea romance movie called "Trouble in Tahiti." At first she dismisses it as sentimental drivel. But as she recounts the story and its theme song "Island Magic," backed by the Trio ("What a movie!"), she gets caught up in the escapist fantasy of love. Suddenly self-conscious, she stops herself, and prepares dinner. On his way home, Sam sings of another law of men— that even the winner must pay for what he gets—as he reluctantly returns to the discomfort of his home.

Scene VII – The Trio sings of evenings of domestic bliss in Suburbia. Sam and Dinah try half-heartedly to talk about their relationship, but their effort turns into yet another argument that devolves into uncomfortable silence. Neither of them has gone to Junior's play. Sam suggests they go to the movies, to see a new film about Tahiti; Dinah consents. As they leave, they each long for quiet and communion, but not knowing if it's possible to rediscover their love for one another, they opt for the "bought-and-paid-for magic" of the silver screen. The Trio makes its final ironic comment, echoing the movie's "Island Magic" theme song.

To purchase sheet music for Trouble in Tahiti, please visit our store. 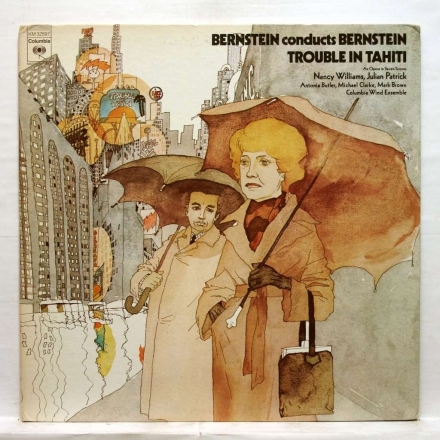 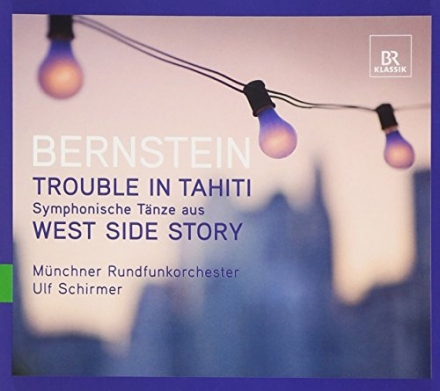 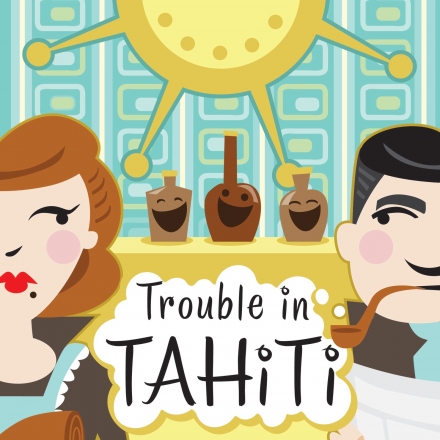