The four shows On the Town, Wonderful Town, Candide, and West Side Story show a progressive line of stylistic integration in Leonard Bernstein's compositional development. An ever-advancing economy of musical means and tightening of structure proceeds from one show to the next. It was almost predictable from this trend that when West Side Story hit Broadway like a bombshell, in September, 1957, it would be hailed as a landmark in American theater. It was indeed recognized as a major leap toward an original kind of theatrical conception. Bernstein had speculated much earlier that a genuine, indigenous form of American musical theater would eventually arise out of what has been known as musical comedy. Many people think that, in West Side Story, this theory began to be implemented. Elements from the European and American musical stage traditions were fused into an original art form that is neither opera nor musical comedy.

From the Old World tradition came complicated vocal ensembles, such as the Quintet in Act I: the use of music to project the story line forward (as in the duet A Boy Like That); the dramatic device of leitmotifs—for instance, the one associated with the reality of gang violence, as in the Prologue, or the one associated with the diametrically deductive-inductive species of developing musical materials, by basing much of the West Side Story score on transformations of the tritone interval, or by immediately developing the opening statement of any given song with melodic or rhythmic variation.

From the New World came idiomatic jazz and Latin timbres and figurations (most of the dance music); a fluid and constant change from word to music and from scene to scene, such as the second-act ballet that goes from accompanied spoken word into song, into dance and back again; and most important, the kinetic approach to the stage—communication through choreographic music—delineated, in concentrated form, by these Symphonic Dances.

Why are these dances called symphonic? Simply because the dance music, even in its original format, is symphonically conceived. Relatively few thematic ideas, combined with each other and metamorphosed into completely new shapes, are all that are necessary to meet the varying dramatic requirements. This is music on its own terms, music that does not have to depend upon presupposed knowledge of the unfolding events on stage.

However, for those who are interested in knowing what transpires on stage during the course of the dances, the following summary outlines the principal sections of the music (which is arranged so that one section flows into the next without a break):

Prologue (Allegro moderato)
The growing rivalry between two teenage gangs the Jets and the Sharks.

Somewhere (Adagio)
In a dream ballet, the two gangs are united in friendship.

Scherzo (Vivace e leggiero)
In the same dream, the gangs break away from the city walls, suddenly finding themselves in a playful world of space, air, and sun.

Mambo (Meno Presto)
In the real world again, the competitive dance at the gym between the gangs.

Cha-cha (Andantino con grazia)
The star-crossed lovers Tony and Maria see each other for the first time; they dance together.

Meeting Scene (Meno mosso)
Music accompnies their first words spoken to one another.

Cool Fugue (Allegretto)
An elaborate dance sequence in which Riff leads the Jets in harnessing their impulsie hostility, figuratively "cooling their jets."

Finale (Adagio)
Maria's I Have a Love develops into a procession, which recalls the vision of Somewhere.

Throughout the Leonard Bernstein Centennial, Symphonic Dances from West Side Story was by far the most performed work. According to Bachtrack.com’s 2018 statistical performance survey, Leonard Bernstein was the third-most played composer for the year, alongside Beethoven, Mozart, Bach, and Brahms, taking a top spot among the perpetual greats. Bachtrack also reported, that four of the five most-played concert works in 2018 were Bernstein Compositions, with Symphonic Dances from West Side Story holding the number 1 spot.

To purchase sheet music for Symphonic Dances from West Side Story, please visit our store. 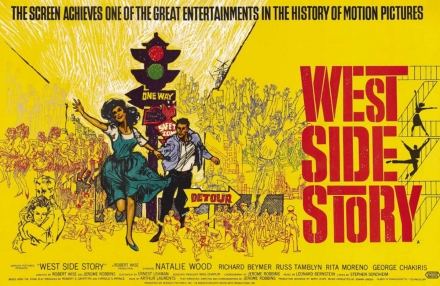